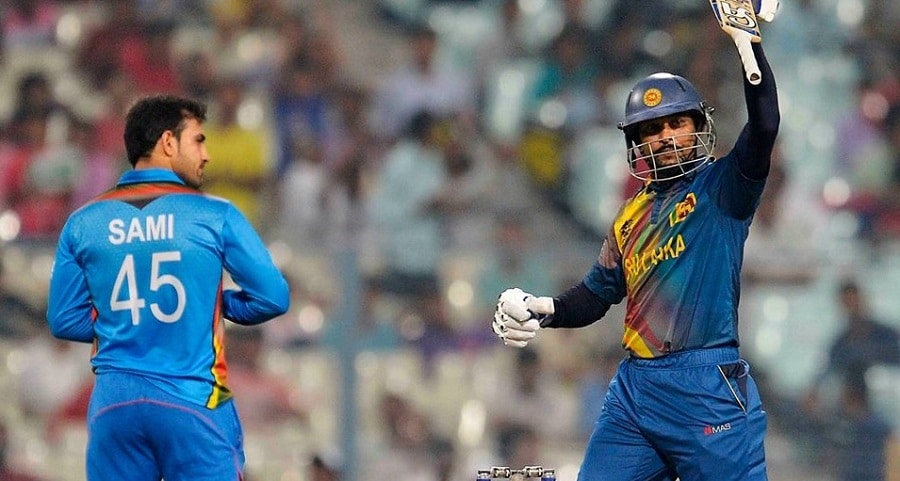 The experienced Tillakarathne Dilshan struck a well-paced 83 to guide Sri Lanka to a 6-wicket win over Afghanistan in their opening game in the ICC World T20 tournament 2016 at Eden Gardens, Kolkata on Thursday.

The 39-year old carefully built his knock through occasional boundaries and excellent running between the wickets to notch up his 13th T20I half-century and went on to remain unbeaten on 83 off 56 balls with a strike-rate of 148 to stroke 8 fours and 3 sixes.

Chandimal and Dilshan started off the chase aggressively as the former crafted 10 from the first over while Dilshan brought out his unique ‘DilScoop’ and a confident slap down to the mid-wicket boundary. Chandimal fell for 18 to the spin of Mohommad Nabi to end the exciting 41-run opening stand. One-drop batsman Lahiru Thirimanne struggled to find his rhythm during his 13-ball 6 and chopped one onto the stumps off 17-year old leg-spinner Rashid Khan in the 9th over.

Thisara Perera was promoted to number 4. He smashed a six straight past the site-screen but was given controversially run-out by the third-umpire after trying to sneak a single. Kapugedara backed-up little too much and Nabi’s deflection off Dilshan’s straight-drive ended his brief stay.

Afghanistan looked to surge a comeback but the Lankan skipper Angelo Mathews provided the necessary finishing blows to smash 10-ball 21 to help his team start their title defense with a victory.

Earlier, after opting to bat first, Afghanistan lost their man-in-form, Mohommad Shehzaad in the 3rd over when he tried a rash heave over the leg-side off Mathews but only lobbed it to mid-on as Chameera comfortably completed the catch.

The Afghans scored 36 during the power-play but the Lankans tightened the screws by taking regular wickets as opener Noor Ali succumbed to Rangana Herath around the legs as he misread the length and line of the delivery.

Perera pocketed the wicket of Karim Sadiq as he was caught behind by Chandimal for a duck. Herath struck once again as the dangerous Nabi was given LBW as the ball skidded on to hit the pad. Skipper Asghar Stanikzai was then joined by Samiullah Shenwari when the score was 51 for 4 in 11 overs.

The two right-handers completely changed the momentum towards the Afghans with a stunning and counter-attacking 61-run stand in 33 balls to torment the Lankan bowlers. They collected 13 and 16 off Herath and Siriwardana but Shenwari’s blistering 14-ball 31 ended when Kulasekara got the all-important scalp in the 17th over.

Skipper Stanikzai played a composed anchor role after coming out to bat in the 3rd over but later on shifted to second gear smashing 4 sixes and 3 fours during his excellent 47-ball 62. Perera leaked 23 runs during his last two overs but ended with 3 for 33 while Kulasekara gave away 30 off his final two overs as Afghanistan amassed 106 runs in the final 10 overs to post a commendable 153.