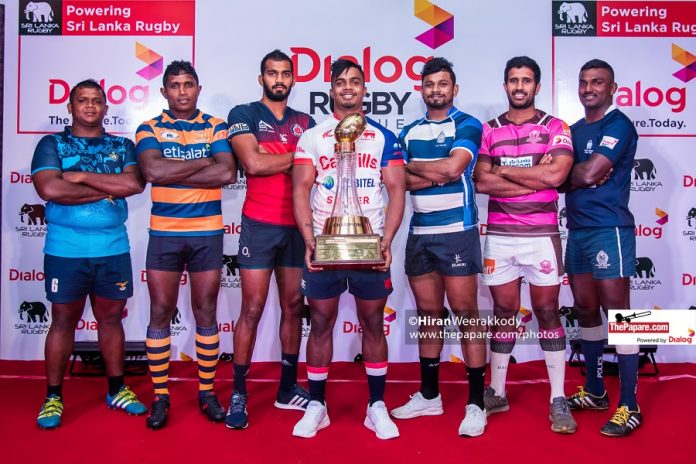 The prominent sponsor for sports in Sri Lanka, Dialog Axiata PLC, continues to power the ‘Dialog Rugby League’ for the 7th consecutive year. The official media briefing to announce further details regarding the tournament was held earlier this evening at the Colombo Swimming Club.

The Dialog Rugby League 2018/19, is set to bring the rugby fever back with some thrilling action throughout twenty weeks of exciting rugby starting from the 9th of November 2018.

The official media briefing of the tournament was held earlier today at the Colombo Swimming Club, with the participation of the teams, Sports Body, Referees Association, Media and most importantly the honorable Minister of Sports, Mr. Faizer Mustafa. Other dignitaries who graced the occasion were Mr. Lasitha Gunarathna, President of Sri Lanka Rugby (SLR); Mr. Rizwie Ilyas, Vice-President of SLR and Harsha Samaranayake, General Manager, Brand and Media – Group Marketing Dialog Axiata.

With the Dialog Club Rugby League just a few days away, know who the Captains are of the eight teams in the top division. 1…….

Sharing his opinion with regard to the regulations of including foreign players in a team, Mr. Ilyas confirmed that only one overseas player will be allowed to take part in a match, be it in the starting line up or the bench.

Adding further on, he stated that SLR will consider reintroducing the inclusion of overseas players to all eight teams in the tournament next year, IF this year’s plan ends on a positive note.

Minister Faizer Mustafa, adding color to the event, said, he appreciated and praised Dialog Axiata PLC for powering not just club rugby, but many other sports in the country through their valuable sponsorship and support. “Dialog actually makes my life easier!” he stated with a smile.

Answering a question raised with regard to the duties of the Sports Ministry towards Sri Lanka Rugby, SLR President Mr. Gunarathna said that he is happy, confident and has hope for a better structure and system in the rugby arena as the Sports Ministry is always on the lookout to help whenever needed.

Harsha Samaranayake on the other hand, went on to speak about how Dialog is open to support and uplift any sport or sportsman in the island that has potential to bring glory to our country.

Adding glamour to the evening were the coaches, captains and managers of all the teams, who joined the organizers in fellowship afterwards as the media briefing came to a close.

The coach of the CHAMPIONS?

Know your Dialog Rugby League coaches ahead of the beginning of the tournament.

The Rugby League will be followed by the Dialog Clifford Cup as usual and will be played under the standard World Rugby rules as always.

Stay logged to ThePapare.com for live and exclusive coverage of the Dialog Rugby League 2018/19.