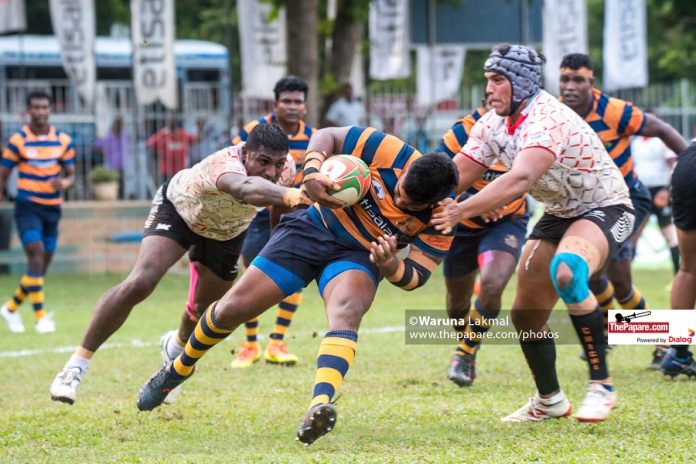 Army SC managed to surprise CH & FC with an early surge in the second half, which helped them see through till the full time whistle. Although CH led 13 points to 10 at lemons, Army scored two more tries in the second half securing a 24 – 18 win at Police Park, earlier today.

Similar to last week’s encounter between CH and the Air men, young Samuel Maduwantha got off to a shaky start, kicking the ball on the full at the kick-off.

Getting straight into action, Maduwantha tried to make amends to his mistake by attempting a drop goal in the 3rd minute, but failed. However, 4 minutes later he converted a penalty to points, putting CH in an early lead. It was the definition of a see-saw battle as both teams looked physically and mentally alike. 10 minutes later, Gayan Salinda used his boot to level the scores and bring the Soldiers’ back on track. (ASC 3- 3 CH)

As the first half neared its end, CH found themselves inside the Army ’22 and made sure it count. After receiving a long cut-out pass from Nishon Perera, Naveen Henakankanamage scored the game’s first try in the far corner. Maduwantha added the extra two. Striking back almost immediately, the Soldiers’ were ready to counter. 34 minutes into the game, Sameera Bulathsinhala scored probably the try of the day, after destroying the CH defense line beating over 5 defenders to touch down slightly away from the posts. Salinda made sure he made no mistake as both teams were back neck to neck. However, at the brink of half-time, Maduwantha got second time lucky with his drop goal attempt and put CH in the lead.

Bringing the second half to life, Thirusha Adikaram found himself over the whitewash just two minutes since play resumed. Looking on song today was Salinda who converted the try. As the game progressed towards its final quarter, once again it was a right to left – left to right, kind of encounter where both teams equally held possession. (ASC 17 – 13 CH)

However, Ashan Bandara managed to score for the Soldiers’ after a gutsy effort by the forwards who held four scrums in under 5 minutes inside the CH 5m line, for Army. With a successful conversion from the right most corner, Salinda put his side on a rather winning position extending Army’s lead. Although Sudam Sooriyaarachi scored for CH with 15 remaining on the clock, Army managed to hold their defense lines and out play the Gymkhana Club boys.

WHAT WENT RIGHT FOR ARMY?

First up it was the positive rugby that Army brought to the field which earned them that victory. They took calculated risks, like offloading the 50/50 passes, running from their own ’22 and rushing up in defense. For instance, after winning a ’22 drop out, Ashan Bandara just tapped the ball over the line and ran up to the CH 40m line and created momentum out of nowhere, which eventually ended up in Bulathsinhala going over to score a try.

The other thing they were spot on with was the kicks. Be it territory or at goal, Gayan Salinda made no mistake. He put the forwards in positions they were comfortable to set a driving mauls and marshal towards the try line.

WHAT WENT WRONG FOR CH?

Starting from the sloppy forwards, miss kicks and the scattered defense lines, CH looked out of shape from the start. Although the two Perera’s (Nishon and Hirantha) made some outstanding breaks in the midfield, the team failed to finish and execute. Scrums were steady in the start, but towards the latter part of the game, Army had no trouble in causing some serious problems to the CH pack.

The actual game changing moment was the tackle on Sudam Sooriyaarchi in the first half. After an excellent back line move, Henakankanamage combined with Hirantha Perera, managed to create an opening for Sooriyarachchi who looked like he was scoring for all money. But, after losing the ball when he was tackled from behind, CH surer than not, lost the game there.