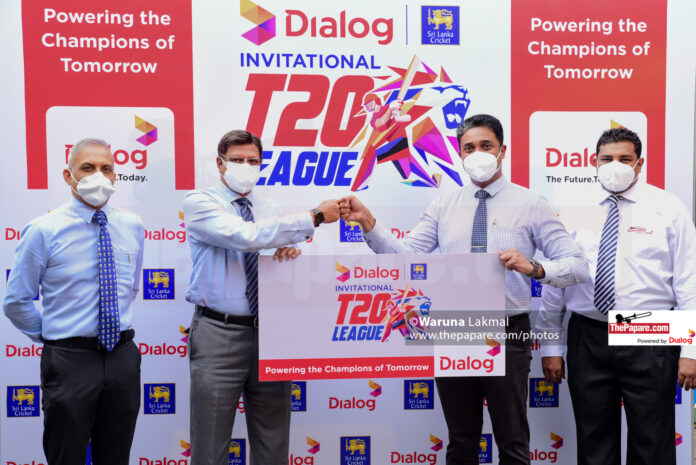 Sri Lanka’s premier connectivity provider, Dialog Axiata PLC has come forth as the title sponsor for ‘Dialog – SLC Invitational T20 League’ which will be played from 12th to 24th August 2021 at the Pallekele International Stadium, Kandy.

The ‘Dialog – SLC Invitational T20 League’ will be broadcast LIVE on Dialog Television Channel One, Dialog ViU app on Mobile and will also be live-streamed on ThePapare.com and ThePapare Cricket Facebook page as well as SLC (Sri Lanka Cricket) YouTube Channel.

As the title sponsor of the League, Dialog will also power the four teams, ‘SLC Blues,’ skippered by Dhananjaya De Silva, ‘SLC Reds,’ skippered by Dinesh Chandimal, ‘SLC Greens,’ skippered by Ashan Priyanjan and the ‘SLC Greys, skippered by Dasun Shanaka will be competing for top honours in the tournament. The Competition will see Sri Lanka’s leading National and First-Class Cricketers in action.

The Dialog – SLC Invitational T20 League will see each team playing 06 games in the initial round, whilst the top 2 Teams will qualify for the Finals to be played on the 24th of August 2021 at the picturesque Pallekelle International Cricket Stadium.

The Tournament will be played in accordance with international standards, and the games will take place as ‘Double Headers,’ with the first game starting at 02.30 PM and the next one at 07.00 PM. The inaugural game of the league will take place between the Greys and the Greens.

The entry of Dialog Axiata PLC to power with the latest competition comes on the back of its long-standing partnership and much broader engagement with the SLC as the ‘Official National Team Sponsor of Sri Lanka Cricket’.

“The entry of Dialog Axiata to sponsor this tournament which we are conducting as part of our preparations for the South Africa Tour of Sri Lanka and the also the upcoming ICC T20 World Cup is highly welcomed, and I take this opportunity to thank Dialog for its unwavering commitment shown to promote the game,’’ said Mohan de Silva, Honorary Secretary of Sri Lanka Cricket.

“In the recently concluded India Tour of Sri Lanka, a young Sri Lanka side beat the odds to win the T20 series against India by simply ‘BELIEVING IN’ their ability and talent to play like champs,” he also added.

“As the proud sponsor of the National Cricket Team, we are pleased to have partnered with Sri Lanka Cricket to come forth as the title sponsor of the ‘Dialog – SLC Invitational T20 League,’ which would help identify fresh talent into the National T20 pool ahead of the key upcoming tourneys. I wish the ‘Dialog – SLC Invitational T20 League’ a successful tourney,” said Harsha Samaranayake, Senior General Manager – Brand and Media, Group Marketing, Dialog Axiata PLC.