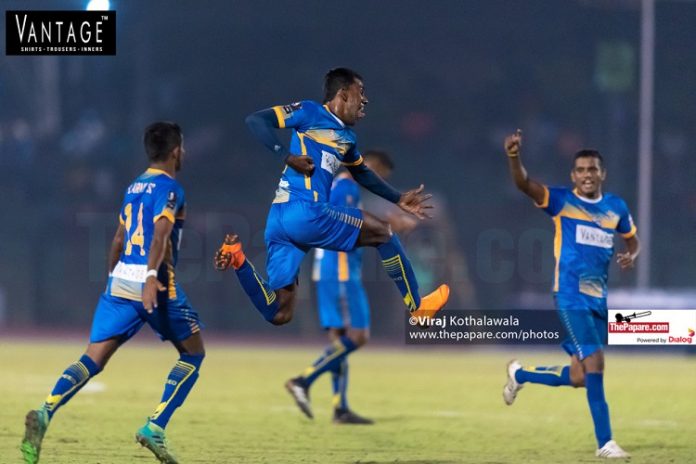 Mohamed Issadeen’s goal was the difference as Defenders FC defeated Renown SC in a game riddled with injury breaks in a week 5 match in the Dialog Champions League 2018 game, played at the Kelaniya Football Complex.

Defenders, off the back of a third consecutive FA Cup triumph, were in 2nd place with 13-points from 5 games while 7th placed Renown had 10-points from 4 games.

Renown was the better side in the opening 45-minutes but was guilty of squandering a few chances letting the hosts off the hook.

They were made to pay for their sloppiness as Defenders were awarded a penalty, albeit a late call after discussion with the assistant referee, after Dimuthu Priyadarshana fouled an opponent who was trying to head a low ball.

Issadeen’s penalty was a poor one which Rasik Rishad dived to save but unfortunately for him, Issadeen had the rebound covered to slot in from an angle.

A rebound effort by Shamil Ahamed from a free-kick was hit straight at Mohamed Luthfi as Renown looked to start the 2nd half brightly.

However, Defenders responded taking advantage of poor passing from the hosts. A few threatening moves were scrappily cleared with a penalty appeal turned down by the referee Buddhika Dias.

The match had multiple injury breaks from the Defenders, disrupting the flow of the game while the actions of the referee infuriated the visiting bench and the fans.

Renown chased hard after an equalizer but poor execution in the attacking third frustrated the Kotahena faithful. Rasik Rishad had a moment of madness when he let through an easy overhead collection but was thankful to a defender who had it covered to head it back to him.

A late penalty appeal had all of Renown up in arms but the referee continued play as time and luck were against the visitors. Renown had a couple of long range efforts which never really tested Luthfi as Defenders registered another big win.