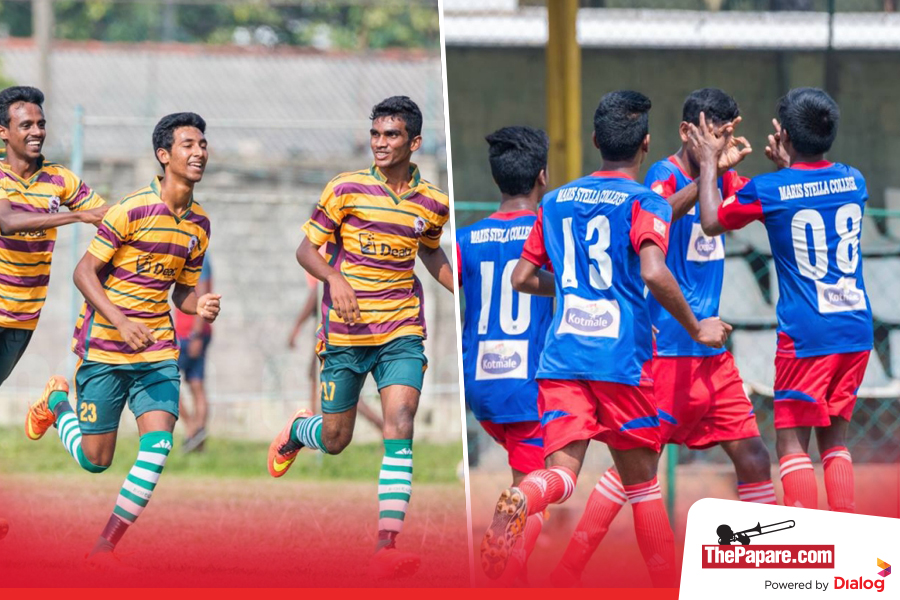 The first semi final of the day kicked off between regional rivals De Mazenod College, Kandana and Maris Stella College, Negombo where the latter won the match with 4 goals to 2.

Maris Stella defeated St.Peter’s 3-2 on penalties in the quarter finals after the match ended 1-1 at full time  De Mazenod came onto the semi finals overcoming U19 Division 1 runners up Holy Cross College, Kalutara by 2-0.

Even though De Mazenod seemed to be making a head start  with a big share of possession it was Maris Stella who scored first with a whooper of a free kick off the foot of Thathsara Fernando.

After the initial goal Maristonians seemed to be back on track and were taking full advantage of long range attempts sending shivers through the Mazenodians.

De Mazenod equalized not long after from a goal off Sudan Manitha who hesitated on the initial attempt made a full turnaround and took the shot. The ball rolled into the goal as Umesh Sanjaya failed to make the easy collect.

The Negombo lads took back the lead from a corner where the initial delivery was headed to the goal mouth and was safely put in by captain Anjana Gunawardena.

Set pieces seemed to work highly in favour of Maris Stella today as Thathsara worked magic once again from another free kick which dropped into goal easily just 6 minutes into the second half.

Mazenod trailing behind, tried valiantly to push upwards and although they succeeded a few times their playmaking seemed very unorganized.

Avishka Deshan scored the second goal for De Mazenod after some scuffling in the penalty box decreasing the gap to one goal.

The game heated up in the final minutes with Mazenod trying hard to at least push the match into penalties but Maris Stella held their ground in face of the incoming barrage of attacks and managed to score another goal and seal the match in the last minute.

The second semi final of the day between hosts Hameed Al Husseinie College and Zahira College, Puttalam was a thoroughly one sided affair straight from kickoff with the hosts having a gigantic share of possession.

Hameed Al Husseinie stormed into the semis blasting Nalanda College away by a score of 4-0. Zahira College, Puttalam on the other hand had to put up a strong fight against Lumbini College to scrape away by 4-3 to reach the semi final.

The hosts scored 4 goals in the first half where all of them were easy tap ins or short range rocket strikes as Puttalam Zahira seemed to put up a very weak defence even with all 10 out field players protecting the goal.

Puttalam Zahira recieved a free kick opportunity to score a goal but the shot was stopped by Mahendran Dinesh who showed no intent of giving his opponents any leeway.

The second half seemed a bit more balanced with Puttalam Zahira holding their half and pulling up occasional attacks but failed to convert any.

Although the Hameedians attack was a bit toned down they managed to put in two more goals in the space of 3 minutes bringing up the tally to a total of 6 and seal their place in the finals.