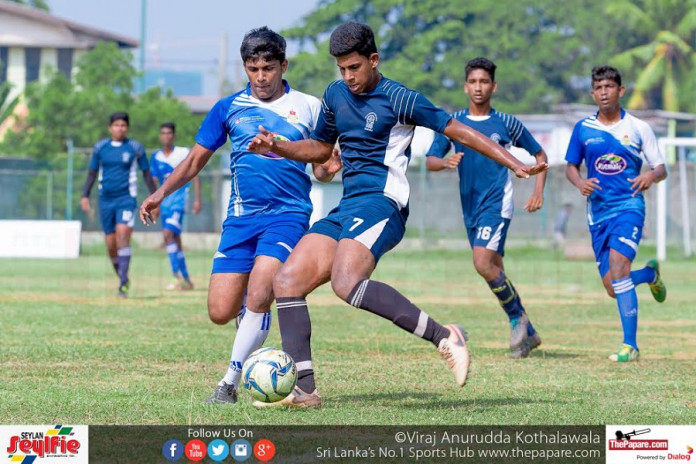 De Mazenod College defeated Holy Cross College 2-0 in the quarter finals of the 2017 President’s Cup organized by the Hameed Al Husseinie College Group of 80’s at the City Football Complex.

Both sides had reasonable successful 2016 with Holy Cross being runners-up in the 2016 U19 Division I Championship after losing out to St.Joseph’s College 2-1 and De Mazenod College lost 3-1 to Zahira College in the Kotmale U19 Schools Football Championship. De Mazenod College was quick out of the blocks and took the lead in the 3rd minute through Nimshan Soysa. Holy Cross with U19 Division I Golden Boot winner Nirmal Udara Perera in their ranks pressed for an equalizer but was not successful till half time.

The 2nd half was no different as the Mazenodians doubled the lead early in the half. This time it was the inform Pramuditha Gunasekara who scored in the 52nd minute.

It was a total dominance for Ananda College and Maris Stella College as they won their respective matches 2-0 and 5-0 at the City Football Complex.

Both sides played entertaining football as expected but the lads from Kandana held their own to secure the win.
The semi-finals will be played on the 15th of January at the Race Course International Stadium.

Kimmich shines as Bayern romp to 5-0 win over Rostov