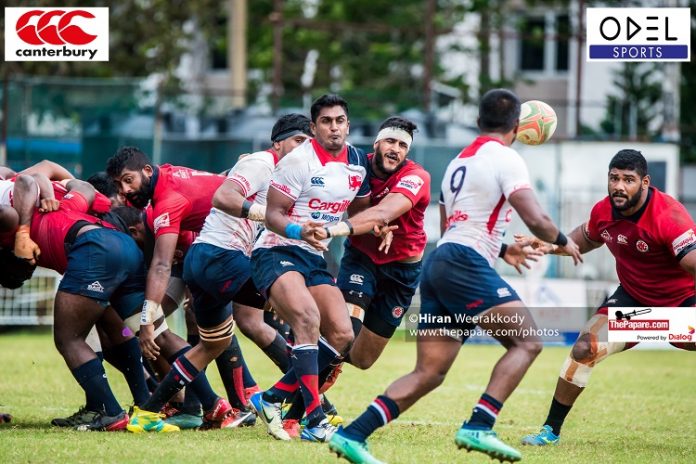 Kandy Sports Club managed to win a nerve-wracking game against arch rivals CR & FC 31 points to 26 in their Dialog Rugby League encounter played at Longdon Place this evening. Kandy scored 28 of their 31 points in the first 20 minutes of the game but struggled thereafter as CR’s comeback fell short by just 5 points in an entertaining game of rugby.

The game was a crucial one especially for Kandy, who were surprised by CH&FC last weekend. Nigel Ratwatte kicked-started the game, hoping that the red-shirts could emulate their neighbours’ achievement againt the defending champions. Kandy meant business from the get go, as the lanky Shehan Pathirana opened up the CR defense with a superlative running angle and a timely basketball pass from Roshan Weerarathne sent Anuruddha Wilware over the line to open the scoring for Kandy. Thilina Wijesinghe made no mistake with the conversion, bisecting the uprights to add the extras. (CR 00 – 07 KANDY)

Kandy scored yet again a few minutes later, as their forwards got into the action this time around with a rolling maul which barged its way over the line to allow Uchitha Jayasuriya to score from the back of the maul. Wijesinghe’s aim was yet again on the money with the conversion. (CR 00 – 14 KANDY)

CR managed to reduce the deficit slightly with a 30 meter three-pointer from Stephan Sivaraj but Kandy continued their dominance as Ashan Darling powered through the CR defense, eventually taking four defenders down with him to pave the way for nippy Scrum half Roshan Weerarathne to score. (CR 03 – 21 KANDY)

Read – Reputed International referee in the Island for two games

CR leaked penalties regularly as Kandy kept on attacking and a box kick from Weerarathne lead to an easy try for the Hill Capital outfit as Shehan Pathirana chased the kick, used his height advantage to gather the ball and then score Kandy’s 4th. With it Kandy managed to secure their bonus point try within the 1st 20 minutes of the game. Wijesinghe continued his good kicking form as he slotted in the conversion from a tight angle. (CR 03 – 28 KANDY)

CR finally managed to get some phases together, using their forwards as half back Rahul De Silva spotted an opening on the short side and sent Wajid Fawmy over the line to score for the red shirts. Sivaraj added the valuable extra two points. (CR 10 – 28 KANDY)

Kandy were sloppy in the second quarter of the first half as CR kept on attacking and created some momentum as the red shirts managed to slot in two penalties from Sivaraj before the break to keep themselves in the game.

CR continued their resurgence as Kandy seemingly went to sleep in the beginning of the second half and kept on leaking penalties as Sivaraj bisected the uprights with an easy kick to cut the deficit further. Kandy finally managed to add a few points after the early bash as Thilina Wijesinghe slotted in a three-pointer. (CR 19 – 31 KANDY)

CR managed to cut the deficit yet again and this time it was a superb move from the backs as Harith Bandara, spotting a miss-match in the left side of the field, sent the ball out and quick hands by the backs to Janidu Dilshan helped him march his way to try line by fending off the experienced full back Thilina Wijesinghe. Tharinda Ratwatte added the valuable two points from a tight angle. (CR 26 – 31 KANDY)

Read Also – How does the Super Round actually work?

CR kept on attacking the Kandy defense in the last 15 minutes of play but the visitors managed to hold on as CR made a few crucial errors at important moments, handing the defending champions a hard-fought win at the end of a cracking game.