It proved to be a repeat of last year’s result, when CR & FC hosted Army Sports Club. The Soldiers came up with a tremendous performance to defeat a ‘’mediocre’’ Reds outfit by 24 points to 10 in their Dialog A Division Rugby League encounter at Longdon Place this evening. The winners collected their points from 2 goals and 2 tries while CR&FC registered 2 unconverted tries.

The huge down pour 15 minutes before kick-off meant the game had to be played under soggy conditions. Both teams struggled to adapt to the conditions but Army managed to pip the hosts in terms of territory in the opening few minutes. The visitors had an opportunity to take the lead in the 6th minute but full back Gayan Salinda’s three point attempt lacked the accuracy. 5 minutes later CR&FC’s stand in skipper Tarinda Ratwatte, let his team down fluffing a regulation penalty kick from 20 meters out.

The game was never a thriller with many stops and starts as both teams struggled to get going. CR’s Omalka Gunarathne and Charana Chamikara were in the thick of things but their efforts were no match for Army’s coordinated defence. Amidst all the scrappy play the hosts did manage to draw first blood in the 30th minute through winger Mohomed Sashan. After a few ‘pick and goes’ by the forwards the ball was sent out wide through the back’s for Sashan to dive over by the corner flag. Tarinda Ratwatte’s conversion attempt from the angle proved futile. (CR 05 – ARMY 00)

The hosts however were back to square one as the soldiers equalized the scores through a magnificent team try that came out of nothing. Army’s Danushka Pushpakumara breached the CR defence and made a thundering charge down the right flank before making a sublime offload from the deck to his prop forward Sugath Nanayakkara who crashed his way through for an unconverted try. (CR 05 – ARMY 05) The hosts suffered another psychological blow when Army scored yet again right before half time through fly half Ashan Bandara who profited from a poor tackle by CR’s Ratwatte inside his own 22’ to dive besides the posts. Gayan Salinda added the easy extras as his team went in to the break with a 7 point lead. 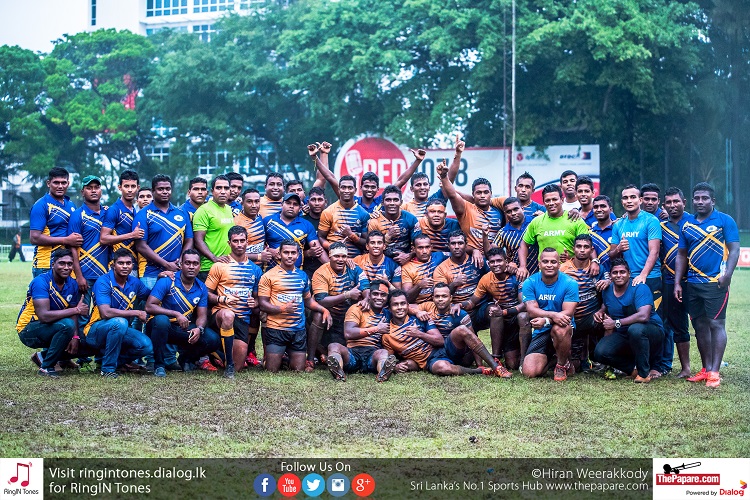 Certainly a better performance in the second was required by the hosts who lacked leadership and looked highly disorganized in their attack as well as defence. They got off to a bad restart though conceding yet another try just inside the opening 90 seconds. The kick off by Ratwatte was too deep and rolled over to the in-goal area giving Army the luxury of bringing back play to the halfway line. Off the resulting centerfield scrum the ball was worked to the right flank before being chipped ahead for Army’s winger Sudaraka Dikkumbura to chase. CR’s Harith Bandara chased the ball alongside Dikkumbura but barley 5 meters away from the Army try line both Dikkumbura and Bandara misjudged the loose ball and instead it was Army’s Ashan Bandara who was “Johnny-on-the-spot” to pounce on the loose ball and dive in besides the posts. Gayan Salinda added the easy extras as Army extended their lead. (CR 05 – ARMY 19).

The hosts tried to make a comeback in the game but poor ball handling and the absence of a leader was clearly evident amongst them. CR did have a chance to reduce the deficit but full back Shanaka Kumara, who took over the kicking responsibilities from Ratwatte, couldn’t find the target in a 30 meter penalty attempt. The Red shirts did strike back in the 55th minute scoring a try which was a carbon copy of their first, but only this time through their other winger Reeza Rafaideen. Shanaka Kumara’s conversion was no good and Army still led.  (CR 10 – ARMY 19).

The hosts desperately tried to step up the pace of the game but the visitors seemed to be in control taking advantage of CR’s inability to hold on to possession. The result was sealed 8 minutes from time when the Soldiers scored their 4th try and it was that man, Ashan Bandara yet again. The ball was sent out on the blind side and Bandara managed to evade Chanaka Chandimal’s feeble defensive attempt to touch down for his hat-trick. The try went unconverted but it didn’t matter for the visitors as they were now 2 scores ahead of their opponents who looked to have already given up. Instead the hosts signed off the game with 14 men as replacement flanker Sashika Fernando was shown yellow for a late tackle.

The defeat which is now their second of the season has left CR&FC in a spot of the bother and their coach Fereti Verebula will need to address the shortcomings if they are to mount any serious threat to the title which already looks to be slipping away. For Army however it will be a moment to cherish having got the better of both the Colombo 07 clubs so far this season.