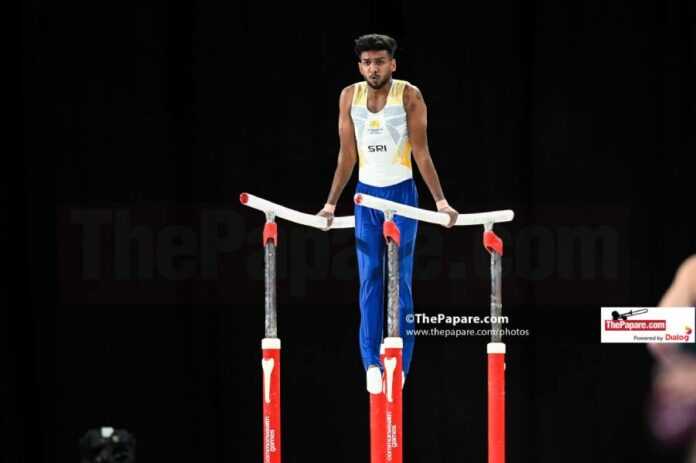 Team Sri Lanka took part in a number of different competitions during day 3 of the Commonwealth Games in Birmingham, including the Men’s and Women’s All-Around Finals in Gymnastics.

Akalanka Peiris could not make it through the 1st round of the Men’s 50m Backstroke but gave it his best, finishing with a National Record of 26.15s. He finished 7th in his heat.

Ruchira Fernando and Milka de Silva competed in the Men’s and Women’s All-Around Final in Arena Birmingham. Fernando finished in 16th place out of 18 finalists, while de Silva unfortunately could not finish as she seemed to suffer from an injury.

De Silva managed scores of 10.500 in the Parallel Bars and 10.550 in the Balance Beam but could not put in performances for the Vault and Floor Exercise disciplines.

The 3×3 Teams bowed out of the Games with 2 more losses. The Women going down to Australia 21-02 and the Men falling short by 21 points to 8 versus Canada.

Both Men’s and Women’s pairs lost in straight sets. The Men, Malintha Yapa and Ashen Rashmitha lost 21/13, 21/12 while on the Women’s side, Deepika Bandara and Chathurika Weerasinghe lost 21/10, 21/12.

It was a historic day on the Rugby field as the Men’s side continued to impress, winning their 13th/14th place playoff semifinal against Zambia 27-14. This was just their 3rd ever victory in the Sevens arena at the Commonwealth Games. They unfortunately went on to lose the 13th place Playoff against Jamaica 26-24, finishing 14th overall.

The Women unfortunately closed out their competition with another scoreless loss, this time to South Africa, where they went down by 52 points to nil.

Chanithma Sinaly, who lost her Roundof 32 encounter yesterday, came storming back in the Plate Round of 16, beating Naomi Phatsima of Botswana in straight sets, 11/5, 11/1, 11/5.

Sinaly will play in the Plate Quarterfinals against Sunayna Kuruvilla of India later today.

After a brilliant Bronze medal on Saturday, Sri Lanka would have been hopeful as two of their past Commonwealth Medalists Chathuranga Lakmal and Indika Dissanayake took to the mat. Unfortunately, neither could come away with success, with Lakmal finishing 5th in the Men’s 67kg weight category with a total of 259kg lifted (119 Snatch, 140 Clean and Jerk), while Dissanayake bowed out with three failed attempts in the Clean and Jerk.