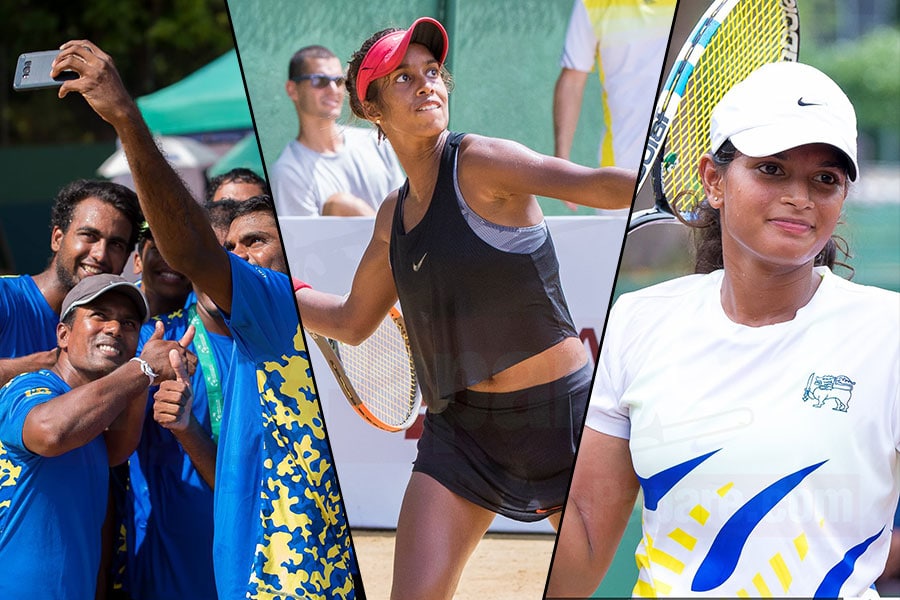 In its 102nd year of existence, Sri Lanka Tennis Association, has once again shown extreme prowess and perseverance through their officials, players and fans alike. After being relegated to the third group of the prestigious Davis Cup in 2016, the men showed valor and regained their rightful position in the second group after four grueling ties. The men in wheels took flight all around the globe bringing fame and glory to mother Lanka, finishing the year with three men in the top 100 in the Wheelchair World Rankings. Sri Lankan born and bred Adithya Karunaratne defied all odds and achieved her lifelong dream in entering the big leagues.

Read Adithya’s story:“I want to be a player with an unforgettable presence”

We look back at the top 5 moments of this year which has carried Sri Lanka to greater heights.

The Asian Tennis Tour hosted by the Sri Lanka Tennis Association was a four-week long singles series with the first two weeks being the men’s competition and latter being the women’s.

The two-time national champion, and proud Visakhian, Thisuri Molligoda played fantastic tennis during the two weeks to claim double majors. Where men, the usual stars of SL Tennis couldn’t shine, the ladies stepped up in ultimate form. Hats off to Molligoda!

Hailing from a Tennis-centric family, Adithya Karunaratne is the sister of class player Yasodara Karunaratne who held high ranks in the Island’s grades. Adithya currently resides in Barcelona, Spain and is a full-time tennis player aspiring to go pro.

Fighting for almost two years for a spot in the WTA main draws, Adithya along with her father Lloyd traveled all of Asia and Europe to collect sufficient points to step up. It paid off when she was awarded the position this month after performing impeccably in the Astoria Futures Series played in Sri Lanka, and other ITF futures events in Tunisia and Spain. She goes down in the history books as the youngest female of Sri Lanka to achieve such a feat at just 15 years of age.

ThePapare wishes the young stud a bright future ahead with many more accomplishments to her journey.

Back to where we belong

The lads went marching in along with 8 top nations to secure its previous place in Group II of the Asia continent of the coveted Davis Cup Championship by BNP Paribas. After five years of holding on, Sri Lanka lost out in unfortunate form to Indonesia in 2016 to be relegated down to Group III. Thus, started the journey for the men with immense pressure on their shoulders to climb back up and regain lost glory.

Sri Lanka Tennis Association lit up on the 17th of July with 9 countries clashing to claim one of the top two positions by the end of the week to promote to group II. In Sri Lanka’s way were Jordan, Pacific Oceania, Qatar and Syria.  Sri Lanka successfully defeated Jordan on the first day of play with a 2-1 tie score. Second win for the Lankans came with winning the decider, the doubles, against Pacific Oceania. The third victory was against the Syrians which was in similar style of Pacific Oceania. After losing the first singles with Sharmal Dissanayake on court, it was up to veteran Harshana Godammane and Sharmal Dissanayake to close things out in the doubles, which they rightly did. After topping pool A, they qualified for the promotional tie against Qatar who finished number two in pool B. Winning both the singles, Sri Lanka had won the tie and therefore forfeited the doubles. Sri Lanka beat Qatar 2-0 in the Davis Cup 2017 and progressed to play in Group 2 in 2018.

This was the first time an international event of such caliber was live streamed and us at ThePapare.com had the opportunity to claim that label.

The biggest of the nation

The Junior and Senior Nationals Tennis Championship is the flagship tournament in Sri Lanka, which takes place on the hard courts of SLTA – this year saw the 102nd edition of the prestigious event.

Davis Cup Team member and defending Men’s singles champion, Sharmal Dissanayake impressed again winning the most hungered Men’s singles title, making it look way too easy getting there. The women’s title went to fresh hands of Medhira Samarasinghe after she defeated fellow school mate Anika Seneviratne in the final clash. Medhira is also a member of the National Fed Cup team and a top ranker in the island rankings.

Anika Seneviratne was the winner of 3 events in the junior nationals, taking home the Girl’s Under 18 Singles, Girl’s under 16 Singles and doubles. Additionally, she went on to bag the Women’s Doubles and the Mixed Doubles in the Senior Nationals. First seed Thomian, Avindra Perera defended his crown, getting the better out of second seeded Vibuda Wijebandara in the Boys Under 18 Singles final retaining the title.

The marvelous journey of the men in wheels

The Wheelchair Tennis team is a group of warriors who have tasted blood on the battlefield and is out for more on the tennis courts. They have performed beyond expectation and have reached magnificent milestones this year. Biggest achievements for the team was contributed by S. Dharmasena, R. Ranaweera and M. Dissanayake and they managed to remain in the top 100 of the ITF Wheelchair world standings.

A team comprising of 4 players, D.M Gamini, R Ranaweera, S Dharmasena and L Senaratne took flight in September to compete in 3 ITF Futures series tournaments held in Thailand, Bangkok and Malaysia. The four men returned to the island heavy handed having earned 11 medals in total during the three weeks in play.

Where the abled bodies lack in world rankings, the warriors did their magic with just a racket and chair.