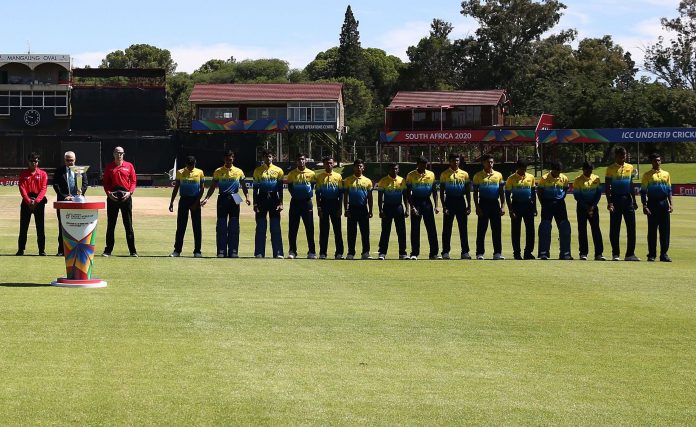 The blame game has already started after the Sri Lanka U19s crashed out of ICC Under 19 Cricket World Cup following a close 3-wicket loss at the hands of New Zealand U19s in a virtual Cup Pre-Quarter final game on Wednesday.

They will now vie for the Plate trophy, which they should come home with just like in the 2018 edition. Before the Plate competition, they will take on the minnows, Japan U19s on Saturday.

The option of having a proper batsman Ahan Wickramasinghe at number eight was a master stroke by the team management. After he was left out from the first game against India U19s, which Sri Lanka were always going to struggle to win, the tall, lanky right-hander top-scored with a fine 64 off 48 balls with 9 fours in the all-important game against the Kiwis.

New Zealand just didn’t know what hit them as Wickramasinghe, who was always rated highly by coach Hashan Tillakaratne as the anchor, took the final score to 242 after he walked out at 141 for 6 in the 37th over.

The chase was always going to be tricky for the New Zealand U19s but Sri Lanka U19s should have defended 242 comfortably. New Zealand only got over the line with a six in the penultimate ball in the match, however, in hindsight, right-arm seamer Amshi De Silva should have played this crucial game as having just one fast bowler in Dilshan Madushanka, was just not enough on the Bloemfontein surface.

Sri Lanka U19s for the past 12-24 months never took the field with only one seamer. Playing only one fast-bowler in South Africa is an unforgiveable mistake. Yes, the plan would have been to choke New Zealand with spin but De Silva is a genuine wicket-taking option with the new-ball as well as in the death overs.

This crop of future stars under the guidance of Hashan Tillakaratne prepped well enough in the past 12-18 months and would be heartbroken to say the least after these two losses. They must not lose heart because it’s not the end of the road for Nipun Dananjaya and his charges. At least a minimum of 3-4 will surely represent Sri Lanka in the future.

Where does the problem lie with Sri Lanka failing to win the coveted ICC Under 19 World Cup in 13 attempts now? As always, it’s the failing cricket structure in the country.

The Sri Lankan Schools Cricket system which was regarded as the best in the world during the past few decades, has declined in quality substantially and must be revamped immediately by Sri Lanka Cricket (SLC) and Sri Lanka Schools Cricket Association (SLSCA).

The number of teams in the top league must be cut down to at least 16 with each school playing in a round-robin stage from September to January. If there are any traditional fixtures, they must be played before the season properly starts or after it’s done. The final round of matches should be played as three-day encounters, instead of the usual two-day affairs.

The schools under 19 limited-overs tournament must also be played simultaneously with the two-day tournament, with serious efforts being put into improving the entire white-ball cricket quality in the country.

To follow the same process in U15 and U17 cricket will be a tough task with more schools participating in the lower age-groups. However, the best talent from lower age-groups must be identified through district level tournaments. Then, they should be treated just like the under 19 pool through a four-year feeder plan.

Planning for 2022 should start now!

Sri Lanka Cricket (SLC) should start planning for the next Under 19 World Cup in West Indies in 2022 from now. Before the current World Cup, no bilateral tours were arranged to South Africa for this Sri Lankan U19 team, which was a cardinal error.

Only seamer Dilshan Madushanka had prior experience playing in South Africa as he toured with the Sri Lanka Emerging team last year. At least a few more players in Nipun Dananjaya, Kamil Mishara, Sonal Dinusha, Ashain Daniel should have been a part of that Emerging team.

SLC must convince Cricket West Indies (CWI) to host their Under 19 team for two series in the next cycle – preferably one tour, 12 months out from the World Cup and one more before the main competition begins.

Both India U19s and New Zealand U19s, who landed knockout punches to Sri Lanka U19s in the group stage, reached South Africa in December to play in a bilateral series and a Quadrangular series prior to the World Cup.

Apart from the Lankans, all the other four South Asian teams – India, Pakistan, Bangladesh and Afghanistan, have qualified for the Cup quarter-finals. Being placed outside the top eight, Sri Lanka will be grouped with two top-tier nations once again in 2022.

So the planning must start now!