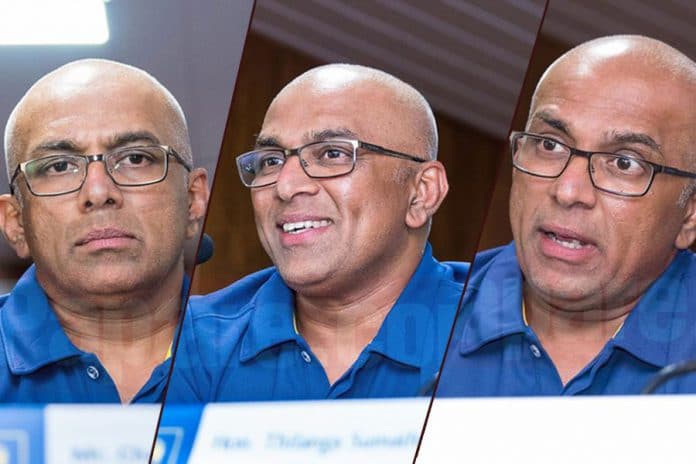 Sri Lanka is a proud country and the island nation’s most valued possession,
Cricket, will turn a new page as Chandika Haturusingha, the new head coach
of the national team assumed duties on Wednesday, 20th December in Colombo.

Hathuru, Mister, you have your work cut out for you…

Former Sri Lanka Test batsman resigned from the post of head coach in
Bangladesh in October after three years in charge during which he guided the
team through their most successful period, masterminding Test wins over
England and Australia at home and Sri Lanka away.

“Looking from outside, looking at our team, I thought it’s a great
opportunity for me to come here and maximize the potential in the Sri Lanka
team that I see from outside. Mr. Mathivanan (Vice-President, SLC) and the
President of SLC assured me whatever the support I want, which prompted me
to take up this job.” Hathurusingha stated at a news briefing held at Sri
Lanka cricket Wednesday.

In the current year, Sri Lanka have lost 23 ODIs and won only 5 games and in
Test cricket, they have lost eight games including a 3-0 whitewash by India
at home but managed a historic Test series win in the UAE against Pakistan.

Sri Lanka have had as many as 7 captain’s this year in all three formats
which has been a worrying factor throughout the last couple of months where
their performances dipped a record low, “Ideally if you have players who can
play all three formats and then command, then we would want him to captain
all three formats but at this stage, we don’t see that happening because SLC
has appointed a few captain’s and I would work with them.” Former New South
Wales and Bangladesh coach stated in response to a question from the media
on if he would opt for one captain for all formats.

Sri Lanka Cricket (SLC) has been in earnest search for the position of head
coach since South African Graham Ford resigned from the post following the
team’s Champions’ Trophy exit in the UK. Nic Pothas, then fielding coach,
was appointed as the interim head coach to overlook the national team. To
the media questions of the use of foreign and domestic coaches, Hahurusinghe
further stated.

“There is a great system of coaches at SLC with plenty of former players
such as Rumesh Rathnayake, Hashan Tillakaratne, Avishka Gunawardene,
Chaminda Vaas and Thilan Samaraweera, so it will be exciting to work with
all of them.”

Hathurusinghe, who is largely considered one of the best coaches in the
world, re-joins Sri Lanka Cricket after previous stints as Head Coach of the
Sri Lanka ‘A’ Team (2006-2009) and shadow coach of the National Team
(2009-2010).

“Consistent selection, correct combinations are the keys to success. We
should be patient with the players as they should get accustomed to the way
I think, how I see things, my training methods so everything should fall
into place for Sri Lanka to see success.” He further mentioned to the
journalists.

Interestingly Sri Lanka’s next assignment will be against Hathurusingha’s
former employer, Bangladesh where the islanders will be involved in a
tri-series with Bangladesh and Zimbabwe, followed by a two-Test series with
the home side. The media was eager in their cross-examination of whom the
entire nation sees as a savior, having come to rescue a disjointed and
underperforming team.

“The hopes of the nation give me plenty of courage. I will try and give my
best to bring success to Sri Lanka Cricket. I am looking forward to that
challenge and I take that challenge as a very good opportunity to take the
team forward.” he concluded to a journalist question on what he had to state
to his countrymen at this time.