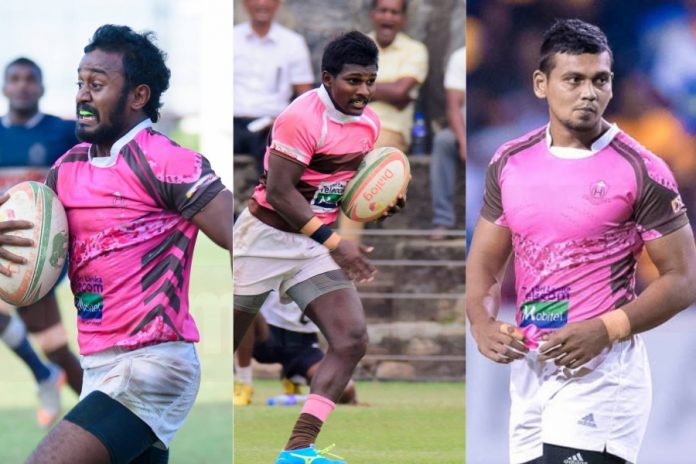 The trio; Kevin Dixon, Hirantha Perera and Sudam Sooriyarachchi will leave Havelock Park and will get fresh contracts. Dixon will continue his rugby at CR while the other two will be moving to the Gymkhana club.

The signing comes at a crucial time when the Dialog Club Rugby Inter Club Sevens is around the corner and will kick things off on the 2nd June.

The three of them, all being national representations will be crucial in their new jerseys as both CH and CR are on the brink of a new chapter.

The wonder kid from St. Peter’s, Kevin Dixon will be the key signing for CR & FC. Having represented his alma-mater for 5 years, he was shortlisted by the Park club soon after his schooling stint. In 2016, Dixon led the Sri Lanka under 20 sevens side to a first ever Asia Sevens Series win when the team won in Hong Kong.

A regular contributor in the national sevens side since 2016, Dixon has excelled for the Pink Jerseys in the last two seasons and his addition to the CR squad would be vital with coach Nilfer Ibrahim in place.

Hailing from Isipathana and being in the limelight of the 2014 Schools’ Rugby League where Isipathana were unbeaten Triple Champions, the nippy scrum half Sudam Sooriyarachchi has come a long way. He represented the Sri Lanka junior teams in 2013 and 2014 and later made his inter-club debut for the Police Sports Club in 2015. Since then he had two phenomenal seasons for the Policemen.

Sooriyarachchi then made it to the Park Club where he excelled in the number 9 jersey which finally got him through to the national sevens squad.

The starting centre from the Havelock SC lineup, Hirantha Perera will be the other player who will be making it to Maitland Place this coming season. Perera represented the “Green Machine” from 2011 to 2013 and played a key role when Isipathana won the double crown in 2012.

He also had the honour of representing the Sri Lanka U-20 Rugby team in 2012 and 2013. While at Isipathana, Hirantha gained the experience of playing from Fly half, both the center positions and full back. He represented the Upcountry Lions in the 2014 inter club league season.

He donned the National Jersey for the first time in 2014 when he made it to the squad that toured to Hong Kong for the Asian 7’s Series.

While Dixon’s presence in this year’s club sevens tournament will not be seen, both Sudam and Hirantha are set to start in the CH colours in the inter-club sevens.