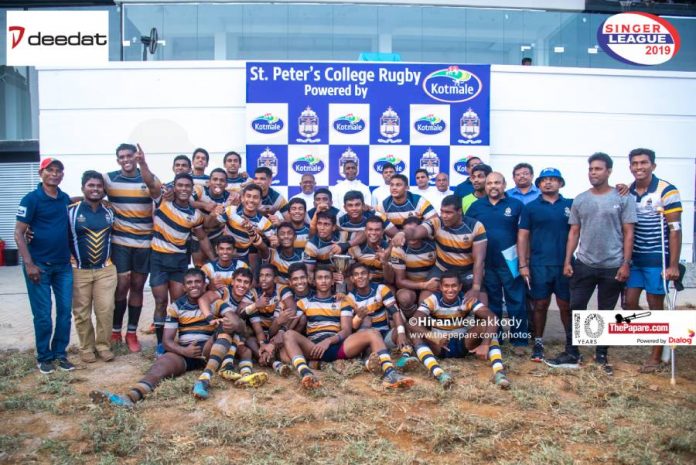 The game was played in hot and humid conditions as both teams missed out on potential try scoring opportunities. It took 13 minutes to break the deadlock as St. Peter’s forwards broke the Royal advantage line and a quick decision from scrum half Ashel Ranasinghe to switch towards the blind side with a long pass to Thenuka Nanayakkara opened up space for the opening try. Sandesh De Mel made peach of a kick to make it a perfect seven. (SPC 07 – 00 RC)

St. Peter’s were relentless in tightening their hold on the game, giving their opposition no opportunity to get out of jail as Royal faced a setback when their flanker was sent to the bin for stamping on a Peterite player.

A few phases later the Peterites gave away an unwanted penalty as Royal opted for the sticks and Maleesha Perera slotted in the easy kick to cut deficit to 4 points. (SPC 07 – 03 RC)

St. Peter’s, after dominating the entire half, saw their discipline slip under pressure at the dying stages as they had to finish the half with one player down with Ishan Fernando being sin-binned when he tried to punch the ball off a player but ending up punching the player.

Royal had the opportunity to further cut the deficit with the penalty received for the punching infringement but Maleesha Perera missed out on the kick.

Royal had a taste of their own medicine at the beginning of the 2nd half with the Peterite maul on song. They gained valuable meters as their forwards kept on attacking phase after phase, before the big prop Senura Perera finally powered himself over the line to score a crucial try. Surprisingly, Sandesh De Mel missed out on an easy kick.  (SPC 12 – 03 RC)

Plan A for Royal was the rolling maul but it was stopped by the Bamba brigade and they then switched to plan B, the pick and drives. Slowly but steadily Royal moved towards the try line with more than 40 continuous phases of play and eventually Kevin Samarasekera managed to break the stubborn Peterite defense to score their first try. The conversion from Maleesha Perera went astray as the game moved towards a nail-biting end. (SPC 12 – 08 RC)

The Bamba Brigade had to defend as if their lives were on the line in the dying embers of the game to secure a famous win as they did away with the unbeaten tag of the defending champions and regained the B.C. Anghie trophy.