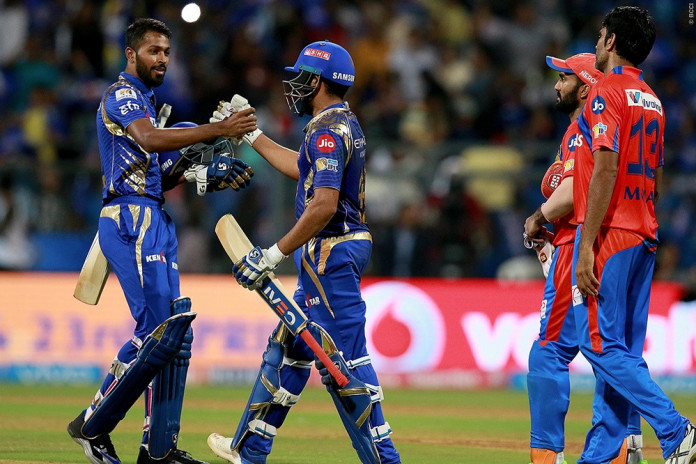 Mumbai Indians registered their fourth win on the trot and reclaimed the top spot with a convincing six-wicket victory against the Gujarat Lions in match 16 of the VIVO IPL.

Opting to field the first game of the double-header on Sunday, Mumbai reached the target of 177 in the final over with their captain Rohit Sharma anchoring the chase. Batting at No. 4, Rohit stayed unbeaten on 40 off 29 balls after their young talent Nitish Rana got another fifty and with it the Man of the Match award.

The home side were boosted by an 85-run stand for the second wicket between Jos Buttler and Rana after Parthiv Patel was dismissed for a duck. Playing his first IPL match since 2013, Munaf Patel removed Buttler but the Lions could not make further inroads. Following on his fantastic knock in MI’s previous game against the RCB, Kieron Pollard played another crucial knock and this time he added 68 runs with Rohit for the fourth wicket.

When the big man got out on the first ball of the 19th over, MI still needed 17 runs from 11 balls but with Rohit at one end and Hardik Pandya taking no time to settle down, the chase was never off track. Hardik hit a four off the first ball he faced and with eight needed from the final over, Rohit started with a four off the first ball and took two doubles off the next two balls to seal their third straight victory this season at the Wankhede Stadium.

Earlier, close to 18000 kids who were at the Wankhede Stadium got enough to cheer as the home team struck in the first over bowled by Mitchell McClenaghan to remove danger-man Dwayne Smith. Mumbai were rewarded for their perfect field setup as Smith hit straight to the backward point fielder. Smith’s opening partner McCullum too struggled initially before he could get going with his trademark shots.

The second wicket pair of captain Suresh Raina and McCullum added 80 runs before Raina got out to Harbhajan Singh. The veteran spinner who was yet again economical (1/22) picked the wicket in the 12th over of the game as Rohit took a fine overhead catch. The wicket put the brakes on scoring as young Ishan Kishan struggled to find the big shots.

Having brought up his half-century in 36 balls, McCullum accelerated from the other end, but he fell in the 14th over to Lasith Malinga, who bowled a straighter one.
Dinesh Karthik carried on his fine form and hit some delightful shots. His first six was a spectacular scoop having moved far down the off side. It was Karthik, who helped the team post a competitive total on a batting-friendly pitch. With just 14 balls left in the innings, Jason Roy arrived in the middle and pushed the total up with 14 from seven balls.

Man of the Match: Nitish Rana