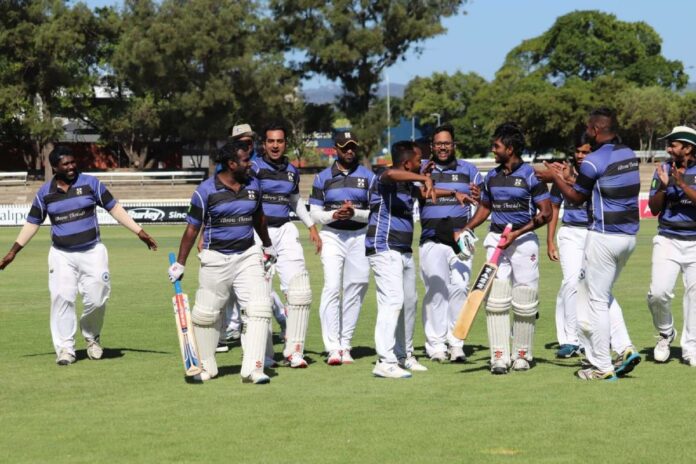 S. Thomas’ College team led by Esala de Livera managed to win a nail bitter of a game at Prospect Oval on Sunday the 21st of Feb to record their second win of the series during their annual Battle of the Blues Adelaide encounter.

Royal College winning the toss elected to bat first on an excellent wicket. It was a horror start for the men in blue and gold as their opening batsman Shanthan Ganesh was run out off the first ball of the innings. Experience campaigner Dhanushka Uswatta came in at number three and steadied the ship together with opening bat Shanil Samarasinghe. After the initial burst from the quicks, the Thomians turned to their depended slow bowling quartet comprising of Esala de Livera, Jehaan Thahir, Rohan Joshna and debutant Rahal Somaratne. With some tight bowling from the spin department and excellent fielding the Royalist lost key wickets during regular intervals. Dhanushka Uswatte scored an impressive 44 runs, cutting and pulling with ease during his innings.

Wicket keeper Manoj Sathasivam gave the much-needed impetus to the innings with a valuable cameo in the middle overs while Shanith Abeygoonawardne held the tail together with a telling 28 runs to finish off the innings. Thomian skipper Esala de Livera’s finished with 4 crucial wickets with his slow right arm offies while newcomer Rahal impressed with a tight spell finishing with 3 scalps. Royal College finishing their innings with an imposing 175 runs for the loss of 9 wickets from their allotted 40 overs.

The Thomian’s chasing had a lot of ground to cover in their initial overs, but the loss of quick wickets at the top of the order meant that they had to consolidate. Experience batters, Devinda Fernando, Rohan Joshna and Revan Mendis falling short on the day due to some tight bowling by the Royal quicks. Dhanushka Uswatte following his brilliant knock with 3 wickets in the middle order ably supported by their front-line bowler Shanthan Ganesh. Opening batter Jehaan Thahir was at his best following up his heroics from last year with a well-crafted 64. Jehaan together with Manesh Fernando, added stability to the Thomian innings with a patient partnership in the middle overs. The pair came together with the Thomians reeling at 3 for 60 runs and managed to put on 53 crucial runs.

The pendulum swung Royal’s way with 3 quick wickets falling within the space of 12 runs. In came Mahen Fernando and ‘Captain Cool’ Esala de Livera with 50 runs shy of victory and RC on top of proceedings with Uswatte in full swing. The duo defended the first few overs, and slowly started to construct their partnership putting pressure on the fielders with some hard and sometimes risky running. Mahen Fernando rotated the strike frantically while the skipper added the odd boundary to stay on top of the asking rate.

The crowd were at the edge of their seats with the momentum shifting with each delivery. Royal were hopeful that they would be able to claim back the trophy while the Thomian’s were in it to defend their claim.

It all came down to the final over with the Thomians needing 4 runs to get. Anuruddha Mediwake took charge of bowling the final six balls with Esala on strike. 1st ball was hit for a couple, and the batsmen running 2 quick singles in 2nd and 3rd balls of the over. Mediwake came back strong with a dot ball and it was 2 balls to go 1 run to get with the scores tied up. Esala finishing with a flourish dancing down the wicket lofting the ball over the infield for a boundary to seal the deal for the Thomians.