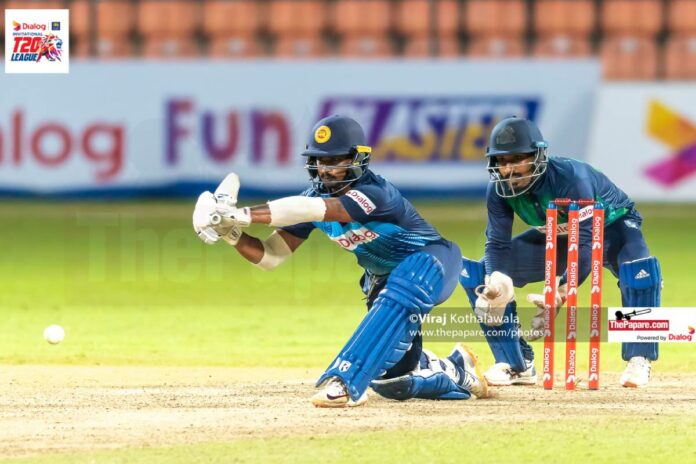 Ashen Bandara of Team Blue played an outstanding knock to take his team over the line in a thrilling battle against Team Green in the fourth game of Dialog-SLC Invitational T20 League 2021.

This was an exciting clash between the top quality shorter format cricketers of the Island. First, it was some quality batting that caught everyone’s attention and then it was the nail-biting finish that became the icing on the cake.

Having chosen to bat first – Just like every other team in the tournament so far – Team Green saw their experienced opener, Mahela Udawatte, walk back in the very first over leaving them at 1 for 1.

There began the elegant strokeplay of Pathum Nissanka who raced his way to a magnificent 76 off 54 balls. Nissanka was transported to another level of confidence right from the start of his innings. He cleared the in-field with ease and used his crease wisely to put off the bowlers.

Right from the time he walked down the track and slapped an immensely experienced Suranga Lakmal over mid-wicket for four until he slammed Shiran Fernando over long-off for a six in the very last ball of the innings, he was simply a treat to watch.

Nissanka did balloon one to cover-point, but come on, this is T20 cricket, luck plays a major role here.

Nissanka was well-supported by Lahiru Udara who got a stylish 44 off 39 runs with 6 fours in his knock. Udara was very busy at the crease and kept the scoreboard ticking at all times.

The killer blow was handed by the young and exciting Kamindu Mendis who played a blinder in the latter part of the Greens innings. Mendis was by far the most fluent batsman of the evening as he kept clearing the ropes with his free-flowing check-drives over the straight boundaries.

They posted the highest score in the tournament with just the loss of 2 wickets as they ended at 180 at the 20 over mark.

Stepping out for an unrealistic chase given that no team has won chasing so far in the tournament and a 6-innings-old surface to bat on, the Blues took everyone by surprise.

They had quite a mild start to their chase with the opener Sadeera Samarawickrama scoring a valuable 47 runs. Coming off a rough patch, this knock would have done a world of good to Sadeera.

Sadeera and Dhananjaya Lakshan picked the team up for a brisk 88 for 1 in the first 10 overs. But soon, Lakshan had to depart owing to a brilliant piece of fielding from Lahiru Kumara off his bowling as he returned a direct hit while Lakshan was lingering out of the crease with his shot.

Within the next 13 runs, the Blues lost 2 more wickets. But the rest of the chase was well taken care of by the youngsters, Sahan Aarachchige and Ashen Bandara who pulled off an unbelievable win.

Sahan struck a quickfire 38 off 22 balls while Bandara struck the winning blow in the last over to take himself to a score of 36 off 18.

The blues needed 46 runs off the last 18 balls and Lahiru Kumara threw away a blunder of an over worth 22 runs. The next over was given to Sandakan and he went for 15 runs. The Blues needed 10 off the last over and Sahan Aarachchige was run-out in the first ball. Still, they managed to spill the beans as a lazy misfield from Sammu Ashan gave away 3 runs in the next ball and the following one – a low full-toss – flew over mid-wicket for a six. The Blues recorded a handsome 5-wicket win with 3 balls to go.