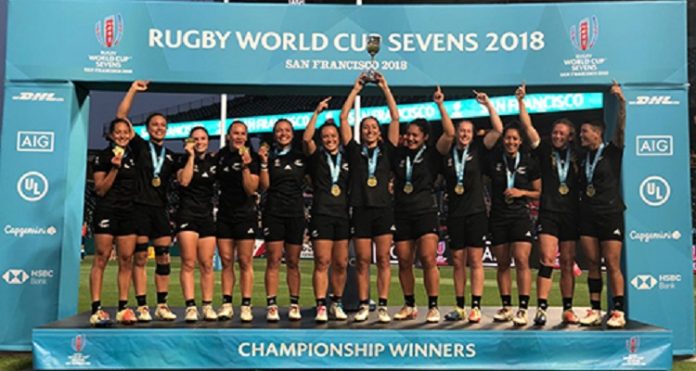 The Black Ferns Sevens are the first team in Rugby World Cup Sevens history to win back-to-back titles after overpowering France 27-0 in the final in San Francisco.

In front of a humming crowd at AT&T Stadium, the Black Ferns Sevens faced a confident and physical France side in the final who had earlier stunned tournament favourites Australia 19-12 in their semifinal.

In a bruising encounter, the Black Ferns Sevens superior pace and unwavering defence proved the difference as they ran in five tries and kept France scoreless to secure the crown.

Michaela Blyde continued her scintillating form with a hat-trick in the final to take her tally to a tournament high of nine tries.

While two of her tries were scored through her trademark pace, the first was all about grit and determination as she refused to die with the ball and powered through a number of French defenders to score.

Portia Woodman scored shortly after following a great breakout from captain Sarah Goss before Tyla Nathan-Wong caught the French defence napping to extend the Black Ferns Sevens out to 15-0 at half time.

France had plenty of ball in the second half but couldn’t break through a Black Ferns Sevens defensive line that refused to yield.

With the clock winding down in the final, Blyde crossed for two quick tries to secure the famous victory and spark jubilant celebrations on the field.

Haka: the @BlackFerns perform spine tingling Haka after winning the #RWC7s for a second time pic.twitter.com/o6k3kgUQxO

The win caps off a special few months for the Black Ferns Sevens which included a gold medal at the Gold Coast Commonwealth Games in April.

Captain Sarah Goss said: “We had one goal and that was to take the World Cup trophy back home and we can’t wait to get back to New Zealand and show it off to the public,” Goss said.

Earlier in the day, the Black Ferns Sevens were put under immense pressure by an impressive USA in their semifinal.

After keeping a clean sheet on day one with big wins over Mexico and Ireland, USA speedster Naya Tapper stunned the Black Ferns Sevens with a two-try burst to put USA ahead 14-5 late in the first half.

With time up on the clock in the first half, and pinned deep in their own half, Ruby Tui broke free for a crucial strike to cut USA’s lead to 14-12 at the break.

The Black Ferns Sevens snatched the lead back early in the second half when super sub Gayle Broughton put on some fancy footwork to dance through the USA defensive line and run 80 metres for a brilliant solo try.

Portia Woodman had limited opportunities in the semifinal but made no mistake when Sarah Goss offered her a chance down the short side to put the Black Ferns Sevens out of reach and book their place in the final.

THAT’S IT! The #BlackFerns7s defend their #RWc7s title with a 29 – 0 win over France!! pic.twitter.com/MyTfiu5ag7