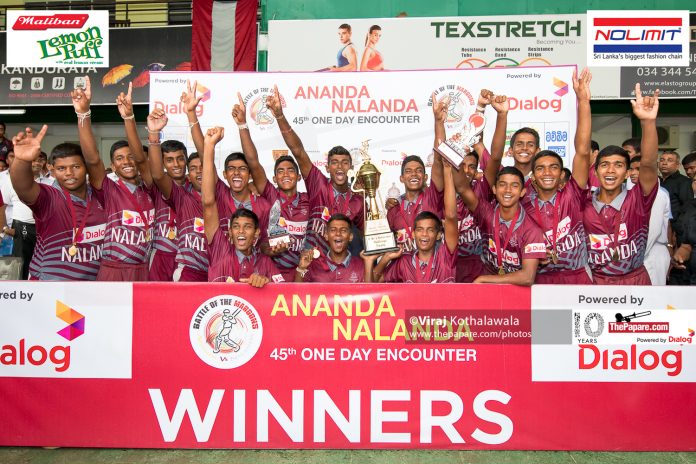 The 45th limited overs encounter between Nalanda College and Ananda College was won by the much-fancied Nalanda outfit by 16 runs on the DLS method, after rain brought a pre-mature end to the match played at the SSC grounds today.

On the same pitch which was used for the Royal-Thomian clash yesterday (16th Saturday), Ananda College elected to bat first after winning the toss. The start for Ananda wasn’t that great as Sri Lanka U19 cap Chamindu Wijesinghe struck in just the 3rd ball of the match for Nalanda College. It was Sudeepa Agulugaha who was dismissed for a duck.

De Silva took 3 quick wickets to leave the Anandians reeling half of the side back in the dressing room. His victims were Adeesha (22), Nirmal (13) and Moditha Ranatunge (4).

Daminda Rashen and Kalana Wijesiri looked keen on bringing Ananda back in to the match with a platform setting partnership, but it was only until Dineth Samaraweera began his 2nd spell. The 16-year old left arm seamer sent back Reshan and Janidu Jayawardena in quick intervals leaving Ananda on 91/7.

Wijesiri who was then joined by Nadeesha Karunaratne built up a much needed partnership for Ananda. The duo added 75 runs in 67 deliveries taking Ananda past the 150 mark. It was the Nalanda skipper Lakshitha who had to step up to break the partnership as he dismissed Karunaratne for 43.

With the help of valuable contributions from vice-captain Chamika Gunasekara and Maoshada Fernando, Ananda managed to reach a modest total of 197. Kalana Wijesiri’s 46 was the highest score for Ananda while Raveen De Silva ended with 4 wickets for Nalanda. Skipper Lakshitha picked up 3 wickets.

The run chase for Nalanda saw a very lucky start as Big Match centurion and opener Avishka Perera was given 3 lives due to poor fielding from the Ananda boys. Anyway, Ananda figured out a way to come back strongly to the game as their failed opening batsman lightened up the SSC with his gentle medium pace.

Sudeepa Agulugaha who was introduced in the 9th over when Nalanda were comfortably on 34/1, picked up both openers in his very first over. He also went on to pick up 2 more wickets in his following couple of overs. This surprise strike dented Nalanda and left them tottering at 58/4 in the 13th over.

Captain Lakshitha, vice-captain Avishka, opener Ranidu De Silva and wicket keeper Dilhara Polgampola, all were back in the hut cheaply. Then happened the match-winning partnership for Nalanda. Taking full advantage of the defensive tactics used by the Ananda camp Chamindu Wijesinghe and Jayod Caldera added 61 runs for the 5th wicket, slow and steadily.

It was Agulugaha who once again broke the partnership as he dismissed Wijesinghe in the 28th over to bring back hope for Ananda. Caldera, who was joined by Raveen De Silva, made sure no other wickets fell from then onwards as they were anticipating a shower from the dark and heavy clouds which were roaming over the SSC.

Eventually, when the rains fell and play was stopped, the 6th wicket stand between Caldera and De Silva was unbeaten on 22 and Nalanda were on 141/5, 16 runs ahead of the DLS par score. Nalanda faced only 33.1 overs and clinched the match by 16 runs, extending their winning streak to 3 in a row.

The awards were shared equally among both the teams,