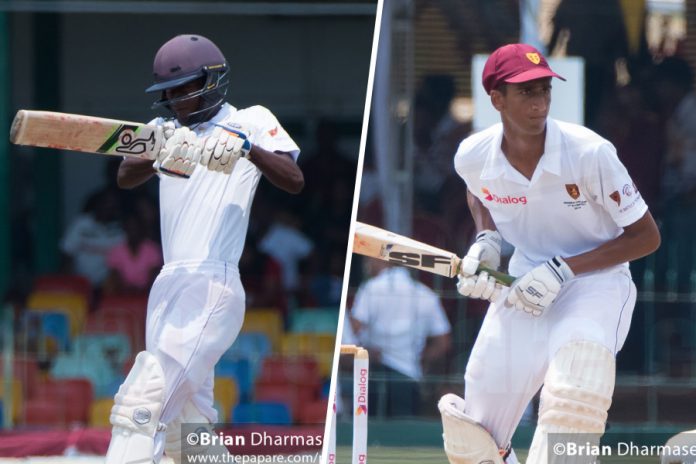 90th Battle of the Maroons has ended in yet another draw for the 16th consecutive time today at the Sinhalese Sports Club ground. The historic clash for the Dr. N.M. Perera Memorial Challenge Trophy between two prominent schools in Sri Lanka commenced yesterday with many celebrated old boys from each school, Sri Lankan Cricket stalwarts Arjuna Ranatunga & Bandula Warnapura as chief guests.

Nalandians came to the field today dreaming of a win after the first day heroics by Avishka Perera with the bat and Dineth Samaraweera with the ball. But Moditha Ranathunga & Janidu Jayawardene had other ideas.

Ananda College was 52/4 when they started second day, trailing 217 with only 6 wickets in hands and lost overnight batsman Daminda Reshan quickly after the start of the second days play.

Moditha Ranathunga and Kalana Wijesiri duo performed a well-orchestrated recovery act to guide Ananda from the danger zone. Wijesiri made a quick fire 39 with 6 fours before departing off Chamindu Wijesinghe’s bowling.

Then, Ranathunga was accompanied by all-rounder Janidu Jayawardene to put up an excellent partnership to guide Ananda College past 200 runs. Both of them scored half centuries as the Nalanda bowlers were made to toil searching for that 7th wicket.

Moditha Ranathunga departed for a well-made 64 as Dineth Samaraweera snatched his fourth wicket. After his wicket Nalanda bowlers quickly wrapped things up securing a thin 37 runs 1st innings lead. Jayawardene was unbeaten at the end with 63 runs to his name.

With a win not in their reach, Nalanda openers came to bat and started to wag around. 1st innings centurion Avishka Perera was run out when he was on 20 and opener Dilhara Polgampola failed again to secure a big score to his name.

Watch – 90th Battle of the Maroons

After the opener’s dismissals skipper Lakshitha Manasinghe & talented all-rounder Chamindu Wijesinghe put a batting show at SSC as they scored rapidly with boundaries all over the ground.

Both looked comfortable at the crease and scored fifties in no time. Captain was finally dismissed for 87 by Gishan Edirisinghe and Wijesinghe ended up piling a run-a-ball 64.

Nalanda College was 216/5 when match officials called quits for the day as the 90th Battle of the Maroons ended in another draw.