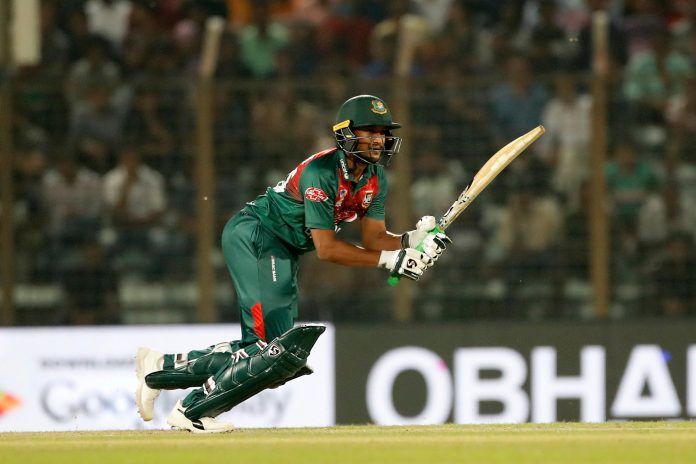 Shakib Al Hasan claimed 1/24 before making a sublime 70* to guide Bangladesh to a four-wicket victory over Afghanistan in the final group stage game of the tri-series.

Afghanistan batted first and, after a steady start, taking just 12 off the first three overs, began to raise the tempo. Three boundaries off four Shafiul Islam deliveries signalled a change of intent, and soon enough, the tourists were motoring, seven boundaries coming between overs six and nine.

However, having raced to 75/0 after nine overs, a double-wicket maiden from Afif Hossain changed the tone of proceedings, Hazratullah Zazai playing and missing twice before holing out for a brisk 47, and Asghar Afghan picking out long on for a duck.

When Mustafizur Rahman had Rahmanullah Gurbaz, Afghanistan’s other set batsman, dismissed caught and bowled, Bangladesh were right back in the game, and they continued to strike regularly. Five different bowlers ended up with something to shout about, including Shakib, whose LBW dismissal of Mohammad Nabi was his 350th in T20 cricket, and while Shafiqullah struck 23 off 17 to wrest back some of the momentum, Afghanistan’s 138/7 looked a meagre target.

Soon into the chase, after a superb burst from the Afghan opening bowlers, it looked gargantuan, as Mujeeb Ur Rahman and Naveen-ul-Haq accounted for both openers and conceded just 17 runs between them in five overs of pinpoint spin and seam. With both still in their teens, and the latter making his T20I debut, it suggested the future is bright for Afghanistan cricket.

Still, sometimes there’s nothing like experience, and a measured half-century stand between old hands Shakib Al Hasan and Mushfiqur Rahim brought Bangladesh back into the contest. Though Shakib was able to find the boundary frequently, Afghanistan did their best to restrict the flow of runs, and finally Mushfiqur became frustrated and holed out of Karim Janat for a 25-ball 26.

The game truly turned after a delay due to a floodlight failure, with Bangladesh losing 3/11 after the unintended interval. Two scalps for skipper Rashid Khan and another for debutant Naveen left the hosts up against it, though when Shakib is in the middle, no game is ever truly gone.

He pushed past his 9th T20I fifty and looked settled, but needed someone to stay with him. Mosaddek Hossain was that man, and he kickstarted the game’s pivotal over, guiding Rashid for four before Shakib took the leg-spinner for 10 in two balls.

All of a sudden, Bangladesh needed nine runs off the last two overs, and they eased home without fuss, taking the momentum with them into the tri-series final on Tuesday, 24 September.