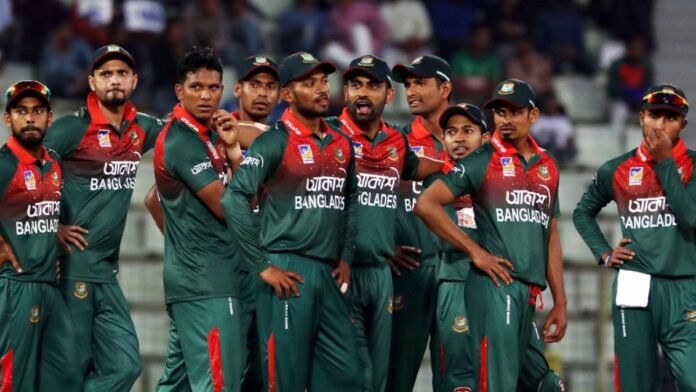 Group B looks set to be hotly contested in the first round of the ICC Men’s T20 World Cup 2021 as Bangladesh, Oman, Papua New Guinea and Scotland battle it out to qualify for the Super 12.

Group B looks set to be hotly contested in the first round of the ICC Men’s T20 World Cup 2021 as Bangladesh, Oman, Papua New Guinea and Scotland battle it out to qualify for the Super 12.

The teams will play each other once in a round-robin format from 17-21 October, with the top two advancing into the next stage.

Oman have home advantage in just their second ICC Men’s T20 World Cup, with all the Group B matches to be played at the Oman Cricket Academy Ground in Al Amerat.

The hosts earned their place after coming through the ICC Men’s T20 World Cup Qualifier 2019, as did Scotland and Papua New Guinea – who will be playing in their first World Cup in any format.

Bangladesh qualified by virtue of their world ranking and enter as favourites to top the group. Whoever does so will join Afghanistan, India, New Zealand, Pakistan and the Group A runners-up in Group 2 at the Super 12 stage.

The team finishing second in Group B will meet Australia, England, South Africa, reigning champions West Indies and the Group A winners in Group 1.

Ever-presents at the ICC Men’s T20 World Cup, Bangladesh have not yet topped their performance in the very first edition in 2007 when they reached the Super 8s stage.

Hosting the tournament in 2014 did not bring a change in fortunes but a squad containing a promising mixture of youth and experience enter in excellent form this time around following an impressive sequence of series wins.

Zimbabwe (2-1), Australia (4-1) and New Zealand (3-2) have all been beaten in T20I series in recent months and veteran captain Mahmadullah will hope for more of the same when the action begins in Oman.

The skipper is one of several seasoned internationals in a Tigers squad which also includes Shakib Al Hasan, Soumya Sarkar and Mushfiqur Rahim, though Tamim Iqbal made himself unavailable for selection in September.

The opener was the leading run scorer in the most recent ICC Men’s T20 World Cup in 2016 but a desire to see the country’s young openers seize their opportunity on the world stage led to his withdrawal, with Naim Sheikh and Liton Das the men trusted to fill Tamim’s sizeable shoes at the top of the order.

With the ball, left-arm spinner Nasum Ahmed has settled seamlessly into the international arena since making his T20I debut in March and seamer Mustafizur Rahman was the third highest wicket-taker at the 2019 Cricket World Cup.

Shamim Hossain and Shoriful Islam, meanwhile, were part of the squad which helped Bangladesh claim Under-19 Cricket World Cup glory in early 2020.

And though they went on to fall at the first hurdle, a combination of steady improvements since and playing on home soil give Oman reasons to believe they can advance further on this occasion.

The attack will be spearheaded by Bilal Khan, who has 51 T20I scalps to his name and took four of them in the decisive 2019 Qualifier against Hong Kong to help his side defend 134 and book their spot at the main event.

The same game was also notable for Jutinder Singh’s 67 and a nine-ball 26 from 39-year-old wicketkeeper Naseem Khushi, who recently struck 40 from 22 deliveries against Sri Lanka.

Both are part of Oman’s 15-man squad along with spinners Ayaan Khan, Nestor Dhamba and Khawar Ali, with the latter set to open up alongside Singh with the bat.

Captain Zeeshan Maqsood, who turns 34 during the tournament, will be a key player in the middle order and also provides a more than handy spin option as part of an attack who could cause plenty of problems in familiar conditions.

Much may depend on Oman’s opener against Papua New Guinea, opposition they have recently overcome twice in ODIs during a successful ICC Cricket World Cup League 2 campaign which has so far seen them win 13 of 18 matches as they look to book their place in India in 2023.

Following near-misses in their qualification attempts for the 2014 and 2016 ICC Men’s T20 World Cups, Papua New Guinea left nothing to chance in the 2019 ICC T20 World Cup Qualifier and were the first team to seal their spot after topping Group A.

A five-wicket win over Netherlands in the group stage proved decisive and though the Dutch got their own back by winning the final, Papua New Guinea were still able to celebrate qualifying for their first ever ICC global tournament.

Assad Vala’s runs from number three will be pivotal while the skipper’s off-spin is likely to play an important role complementing the pace of Norman Vanua.

Vanua, also a hard-hitting batsman, took a hat-trick against Bermuda in the 2019 Qualifiers and will be trusted with the vital death overs.

Opener Tony Ura, meanwhile, has a T20I century to his name and remains the owner of his country’s highest ODI score following a sublime 151 against Ireland in March 2018.

Papua New Guinea have struggled to find their rhythm this year, losing eight consecutive ODIs, but will hope to recapture the form which saw them qualify for this tournament in style when the action gets underway.

Following a seven-year hiatus, Scotland were back in ICC Men’s T20 World Cup action in 2016 and sealed their return by winning the fifth-place play-off against Oman in the 2019 ICC T20 World Cup Qualifier.

The same qualifying tournament saw them defeat Group B rivals Papua New Guinea while a five-wicket win over Ireland in their opening warm-up match suggests this is a Scotland side arriving in good nick.

George Munsey was at his destructive best against the Irish, blasting 67 from 25 deliveries, and just over two years on from his unbeaten 127 in a T20I against Netherlands he remains Scotland’s key man with the bat.

Captain Kyle Coetzer, Calum MacLeod and Richie Berrington, who struck 82 in a victory over Zimbabwe in September, will offer valuable support in a batting unit being advised by former England star Jonathan Trott.

In the bowling department, Brad Wheal and Josh Davey – who took 30 wickets between them for Hampshire and Somerset respectively in this summer’s Vitality Blast – bolster a seam attack spearheaded by Safyaan Sharif.

Scotland start with a tricky clash against Bangladesh on October 17 before taking on Papua New Guinea and Oman as they look to advance past the group stage for the first time in an ICC global tournament.