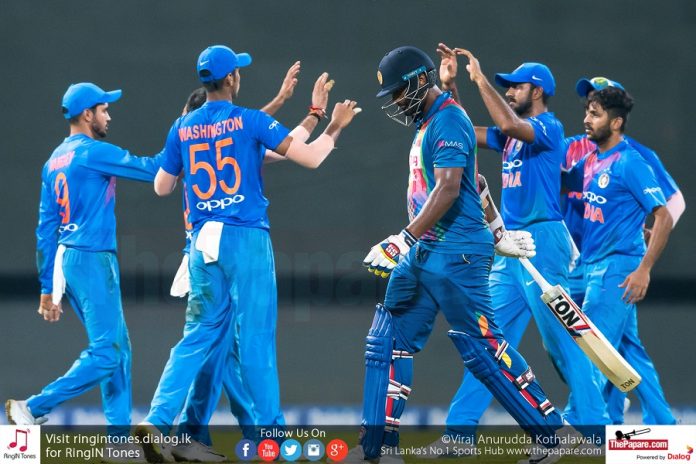 Stand in skipper for Sri Lanka, Thisara Perera expressed his disappointment at the batting display from the hosts in the 4th Nidahas Trophy T20I, which Sri Lanka lost by 6 wickets to India, at the post match presser.

“Kusal Mendis batted really well. But this is not a score you can defend on this wicket. It’s a really good wicket. We were 25-30 runs short, that’s the main reason for our loss. The other batsmen didn’t execute their plans.”

In the previous game it had been the bowling that had let Sri Lanka down as the hosts were unable to defend 214, a record at the R Premadasa. The bowling was improved but  disappointing once again, with the plan to bowl short misfiring badly, particularly for speedster Dushmantha Chameera, however, this time it was the batting that let the Sri Lankans down.

The Lions got off to a flier with Kusal Mendis and Danushka Gunathilake’s partnership looking ominous early on in the game. Kusal Mendis stroked another half century, his 4th in the last 5 T20I innings but Sri Lanka’s middle order collapse meant that the hosts had to settle for a below par total of 152.

Despite the early loss of Gunathilake and Kusal Perera, Mendis carried the Lankan innings through but it was the dismissal of Upul Tharanga, who had looked to take on the bowlers, that halted Sri Lanka’s charge to a great degree.

However, at 96/3 in just over 10 overs, the platform was set for a total close to 180 at least, but the wickets of captain Perera, Jeewan Mendis and eventually Kusal Mendis for a 38 ball 55, meant that Sri Lanka had to concentrate more on surviving their 19 overs.

Perera himself got off to a smashing start, with two sixes off Shardur Thakur, but he holed out going for one too many big shots, “Like I said, the batting unit couldn’t execute our plans, myself included. I was playing well, I should have stayed longer in the middle. My aim was to try and get the boundary balls and push our score higher. We could have batted around Kusal Mendis.”

To add to Sri Lanka’s woes, they went in with the extra bowler in this game, after the batting had seemed perfectly settled during the last two games where they chased down a target of 174 against India and set Bangladesh 214.

“Our no. 7 and 8 batsmen did not get the chance to bat in the previous games. So, we thought we had enough batting firepower in our line-up.”

Despite the wayward bowling, Sri Lanka did have India in some trouble early on but as Perera rightly put, the score was just not sufficient for the Lions to push the Indian batsmen, a factor that could have been changed if there wasn’t a collapse in the middle order.

“In the 1st game, Dasun and I finished the game, so I think our middle order is alright. Our batting is good. We just didn’t execute our batting plans today. The collapse in the middle was the biggest reason for our loss. We should have consolidated in the middle, I think we could have easily pushed the score towards 175-180. As bowlers, you need at least 175 to defend on this pitch so as a batting unit, we didn’t fulfill our duties.”