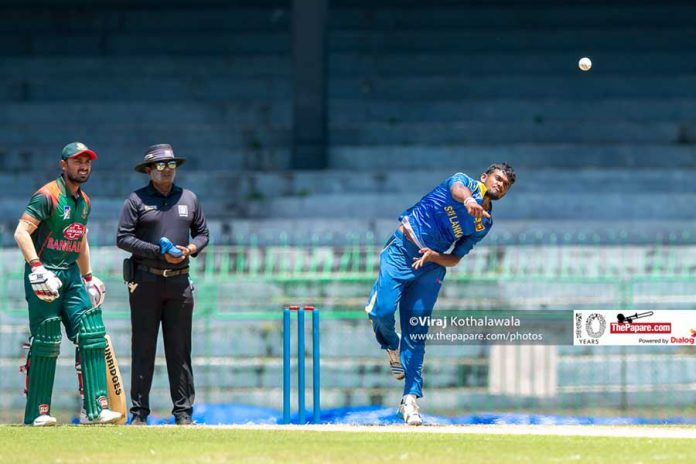 Bangladesh A managed to record their first win on the tour as they clung to a thrilling 1 wicket win in the 2nd Unofficial ODI of the 3-match One-day series vs Sri Lanka A today (10) at the R. Premadasa Stadium, Colombo.

Bangladesh A skipper Mohammad Mithun called correct for the 2nd time and decided to field first after their disappointing loss yesterday (09) where they lost the game by 7 wickets.  The only replacement from Sri Lanka A was wicket-keeper batsman Lahiru Udara’s inclusion in the place of Sandun Weerakkody.

The Sri Lanka A innings was strengthened by two half centuries from Kamindu Mendis and Priyamal Perera who went on to score 61 and 52 respectively. Mendis who hit a brilliant 192 in the 2nd unofficial Test of the tour, coloured his fifty with 6 fours and 1 six. Meanwhile, Priyamal Perera, who was discarded from the national squad ahead of the World Cup, played a composed knock to accumulate a well-made half century before getting stumped by left arm spinner Sunzamul Islam.

After this pair’s dismissals, the Sri Lanka A innings didn’t really get going as the lower order, except for Chamika Karunaratne, couldn’t add many to the scorecard as Sri Lanka A occupied the 50-over quota for the loss of 9 wickets. The all-rounder made a valuable 25 to guide the home team to a total of 226.

Chasing a modest target, Bangladesh A’s skipper Mohammad Mithun and opener Mohammed Naim put their hands up and took the burden from the rest of the batting unit as both delivered fifties to take the visitors to a comfortable position. Mohammed Naim particularly, made it hard for the Sri Lanka A bowlers as his stroke-filled 59-ball 68 took the run-rate pressure off his batting partners.

Though the visitors were set up for an easy finish, a sudden collapse from 4-190 to 8-216 tested Bangladesh A tailenders’ temperament under pressure but they succeeded in the last ball of the game to register a 1-wicket win.

Off spinner Ramesh Mendis starred with the ball for the hosts as he picked up 3 wickets, though his last over (50th over) went for 9 runs which paved the way for Bangladesh A’s victory.

The series is now in the balance at 1-1 and the series decider will be played at the same ground on 12th October.

Bangladesh A won by 1 wickets

Bangladesh A overcomes Sri Lanka A in thriller

Video – ‘Everyone Performed beyond our imagination’ – Rumesh Ratnayake