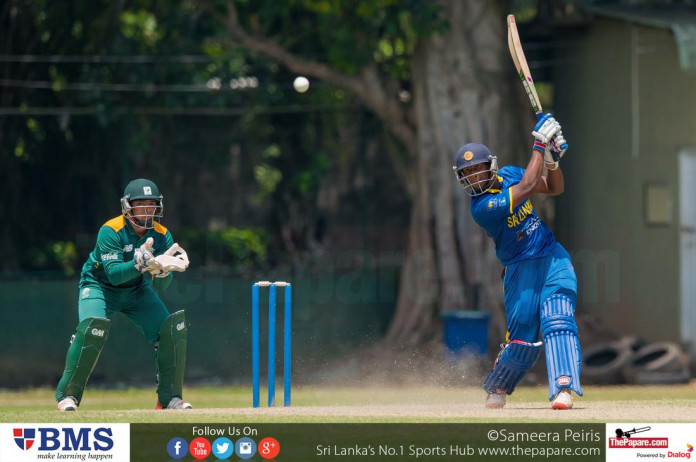 Fernando’s excellent knock of 97 off 115 balls which had 11 crisp boundaries and 2 sixes propelled the hosts’ to 209 which they defended well courtesy some disciplined and tight bowling before rain halted play in the 48th over of the South African innings.


Earlier in the morning, after taking the first lease of the wicket, Sri Lanka U19s lost Pathum Nissanka (4) in the second over when he was caught behind by Ricardo Vasconcelos off left-arm fast-bowler William Senedin.

Vishva Chathuranga made a brisk 20 off 27 before lobbing it straight to gully fielder, Jesse Christensen off Senedin. Avishka and his school mate, Mishane Silva steadied the innings till the 18th over before left-arm spinner Jade De Klerk took two crucial wickets of Silva and Sammu Ashan with two arm deliveries, which trapped both the batsmen plumb in front and restricted the hosts’ to 73 for 4.


Aloysian right-hander Ashen Bandara partnered up with his captain to resurrect the Lankan innings adding 61 for the 5th wicket before he swept straight to square-leg after scoring a patient 60-ball 24.

Wicket-keeper batsman Navindu Nirmal also from St. Aloysius’ College came to the crease and upped the scoring rate by involving in a run-a-ball 51 for the 6th wicket before captain Fernando unfortunately holed up at mid-wicket to a brilliant catch by Akhona Mnyaka. Nirmal made a cheeky 41-ball 26 before being castled by Wiaan Mulder as Sri Lanka U19s were bowled out for 209 in the 50th over.

Sri Lanka U19s brought on their heavy barrage of spinners early on to put brakes to the South African run-flow. Left-arm spin twins, Damitha Silva and Praveen Jayawickrama bowled their full quotas giving away 42 and 27 respectively while picking up a wicket each

After being 140 for 7, Kenan Smith took the visitors closer to the target hammering 3 fours and 2 sixes during his unbeaten 60-ball 46 but the rain gods deprived a tense finish.

South Africa U19s won the first match by 16 runs two days ago at P. Sara Oval grounds.
The third and final match will be worked out at SSC grounds on Wednesday.