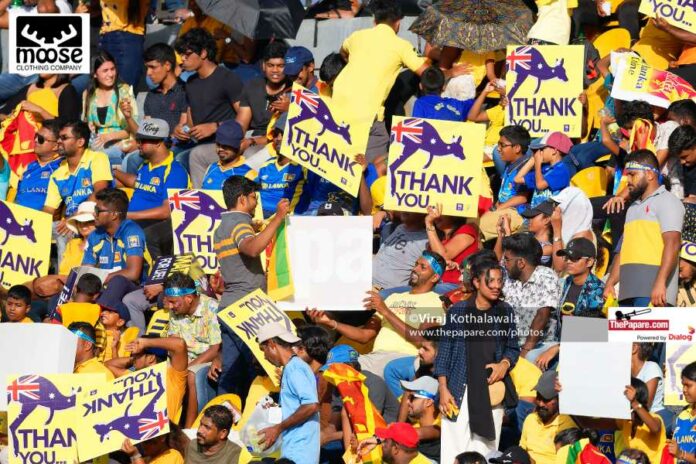 Australia’s men’s cricketers have donated their prizemoney from the recent tour of Sri Lanka to support children and families impacted by the nation’s worst economic crisis in decades.

Led by captains Pat Cummins, who is a UNICEF Australia ambassador, and Aaron Finch, the team will donate A$45,000 to the organisation’s Sri Lanka appeal.

Australia’s cricketers witnessed the crisis first-hand during their all-format tour in June-July this year, with long lines at petrol stations commonplace and the cries of thousands of peaceful protesters echoing around the Galle International Cricket Ground on day two of the second Test, with similar demonstrations in the capital of Colombo forcing the resignation of the country’s president and prime minster.

The economic situation gripping the island nation has resulted in food prices skyrocketing by 80 per cent with more than two-thirds of households having reduced food consumption.

School is limited to three days per week as travel for teachers and students is hindered by fuel shortages, queuing for medicines and fuel has become part of everyday life, health services are increasingly difficult to access, and clean drinking water is in short supply.

“It was very clear to us how much day-to-day life for Sri Lankans is being impacted,” Cummins said.

“When the team saw what was happening it was an easy decision to donate our prize money to UNICEF, who have been in Sri Lanka for more than 50 years supporting the needs of children and families.”

Finch said they felt warmly welcomed by the Sri Lankan people during the white-ball leg and hoped the tour “helped lift their spirits in some small way”.

It’s not the first time the Australia side has been moved by events bigger than cricket during a tour, with Cummins and Cricket Australia both donating $50,000 for oxygen supplies during India’s COVID-19 crisis in 2021 that resulted in the postponement of the Indian Premier League.

“Last year Australian cricketers got behind India in its time of crisis during the peak of the COVID-19 Delta wave and we thank them for again giving generously to help Sri Lankans impacted by the current crisis,” UNICEF Australia CEO Tony Stuart said.

“Australia has a strong bond with Sri Lanka that goes beyond the match days and this donation is gratefully received to support the long-term wellbeing of Sri Lanka’s families.”

The tour of Sri Lanka was Australia’s first since 2016 with the visitors winning the T20 series 2-1 before the hosts claimed the ODI series 3-2, with the two-Test series in Galle squared 1-1.