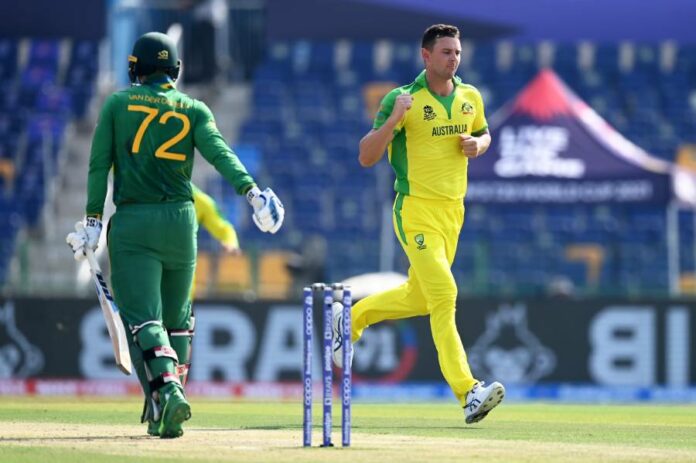 Australia secured a tense five-wicket win in the opening game of the Super 12 against South Africa at the Zayed Cricket Stadium in Abu Dhabi.

Defending a low score of 119, Anrich Nortje and Kagiso Rabada gave South Africa the early wickets they were looking for, removing Aaron Finch and David Warner inside the Powerplay before Keshav Maharaj scalped the in-form Mitchell Marsh.

The wickets of Steve Smith and Glenn Maxwell gave South Africa a glimmer of hope but Matthew Wade and Marcus Stoinis made sure that Australia got the two points on board, winning the game with two balls to spare.

Earlier, South Africa never managed to recover from their poor start in the Powerplay where they lost three wickets, as they limped to 118/9.

Australia’s chase did not get off an ideal start as they lost Aaron Finch in the second over. The Aussie skipper threw his bat at a wide one from Anrich Nortje, only to find Kagiso Rabada at third man.

David Warner, who scored 1 and 0 in Australia’s two warm-up games, looked in good touch at the start. He smacked Rabada for three boundaries before eventually falling to the pacer, luring Warner with a wide delivery. Warner took the bait but ended up slicing it to Heinrich Klaasen at point.

South Africa continued to turn the screws and kept a leash on the scoring rate, which eventually forced Australia to make an error. Mitchell Marsh tried to smash Keshav Maharaj for a six, only to find Rassie van der Dussen at deep mid-wicket.

After the wicket of Marsh, Steve Smith and Glenn Maxwell steadied the ship, mixing caution with aggression to ensure that the asking rate does not get out of hand.

They started to hit their shot after the drinks break, hitting the spinners for a boundary each to bring the required rate to just over 7. Seeing the two batters were comfortable against spin, Bavuma brought in pace and the decision reaped immediate rewards.

Nortje got South Africa the crucial wicket of Smith, but it was as much a fielder’s wicket as it was the bowler’s. Stationed at long-on, Markram sprinted to his right and dived almost parallel to the ground to grab a stunner to send Smith packing.

The wicket of Maxwell, who played all around the reverse sweep off Shamsi, sent jitters into the Australian dugout, with the run-rate climbing to 9.

Wade, Stoinis get Australia across the line

Needing 36 in the last four overs, Matthew Wade shifted the momentum in Australia’s favour after smashing Rabada for two fours in his final over.

With the run rate down to just above 8, Wade and Stoinis decided to not take any risks against Dwaine Pretorius and instead took the game deep.

In the penultimate ball of the penultimate over, Stoinis hit Nortje for a boundary to bring it down to 8 runs off the last over. He then finished it off in style, hitting two fours off the final over to hand Australia the win with five wickets and two balls to spare.

Earlier in the day, South Africa started brightly after being asked to bat first by Finch. Temba Bavuma took the attack to Mitchell Starc, striking two well-timed drives to the boundary in the very first over, but their innings unravelled rather early and quickly.

With little movement on offer for the quicks, Finch brought on Glenn Maxwell at the other end. The move paid immediate dividends as Bavuma missed a quicker one that spun just enough to hit the timber.

In the very next over, Hazlewood managed to extract some movement to get rid of the in-form Van der Dussen, who nicked the ball to Matthew Wade.

It went from bad to worse as South Africa lost their talisman De Kock as he perished attempting the scoop, only to inside edge onto his thigh pad and then hit the stumps.

Markram runs out of partners

Aiden Markram held up his end quite well but kept losing partners at crucial junctures just when South Africa were looking to get a move on.

First, he and David Miller managed to rebuild after the wicket of Klaasen with a 23-run partnership. However, Pat Cummins came back into the attack and struck immediately, catching the leading edge of Klaasen’s bat as Steve Smith completed a good catch diving forward.

He then strung a 24-run partnership with the experienced David Miller before Adam Zampa broke through just after the drinks break. Miller, expecting the ball to turn, played all around the sweep and was trapped plumb in front.

The wicket triggered a mini-collapse with South Africa losing two more in the next six balls, including a disastrous run-out of Keshav Maharaj.

South Africa’s best over of the innings came in the 17th over, fetching 12 runs off Hazlewood’s final over with Markram and Rabada smashing a boundary each.

Markram holed out in the deep to Starc in the very next over, after which Rabada chipped in a few handy runs in the last over to take South Africa’s score to 118/9 at the end of the allotted 20.