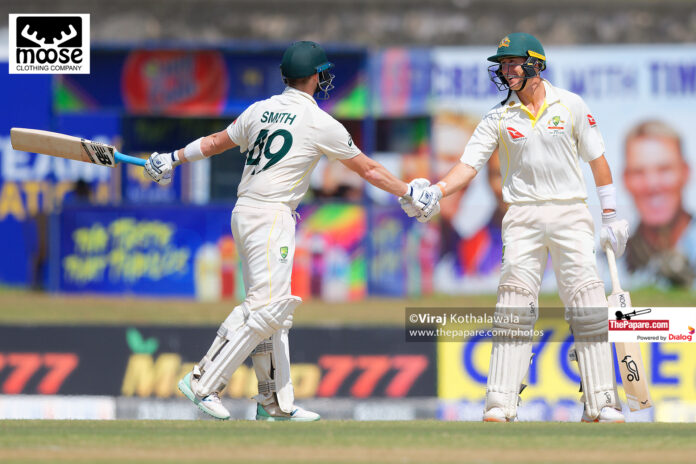 Marcus Labuschagne and Steve Smith both hit tons as Australia ended Day 1 of the 2nd Test against Sri Lanka with 298 on the board for the loss of 5 wickets.

Labuschagne, who had been given a life earlier in his innings, made Sri Lanka pay dearly, with his 1st century outside Australia and 7th overall. He and Smith put on 134 for the 3rd wicket before Labuschagne was stumped off the bowling of debutant Prabath Jayasuriya.

It was a similar manner of dismissal to that which was missed by Niroshan Dickwella earlier in the day, denying Ramesh Mendis a wicket on that occasion. Smith kicked on after the dismissal of Labuschagne, getting to his 1st century in 19 innings shortly before stumps.

For Sri Lanka, lone quick Kasun Rajitha was impressive with the new ball, bowling a peach of a delivery to castle David Warner for 5, before Usman Khawaja and Labuschagne put on 55 for the 2nd wicket.

The former was looking good for another long innings but a beauty from Mendis, which pitched on middle and off and spun away just enough to take the off stump, saw to his end.

Jayasuriya picked up 2 quick wickets in the last session to put Australia under a little bit of pressure, however, Alex Carey joined Smith to steady things and take the visitors to stumps with no further damage.

The pitch seemed a lot more settled than the one that was produced for the 1st Test, but there was still enough spin on offer to hint that the slow bowlers will play a major part in the game.

Sri Lanka bowled better than they did in the 1st Test, but having already conceded 298, they will be under the pump come day 2 as Australia look to push on to that 400-run mark.

Earlier in the day, Sri Lanka made four changes to their team after Dhananjaya De Silva, Jeffrey Vandersay, Asitha Fernando and Praveen Jayawickrama tested positive for covid-19 in the leadup to the 2nd Test. Left-arm spinner Lasith Embuldeniya was dropped after an underwhelming performance in the previous game.

Sri Lanka won by an innings and 39 runs