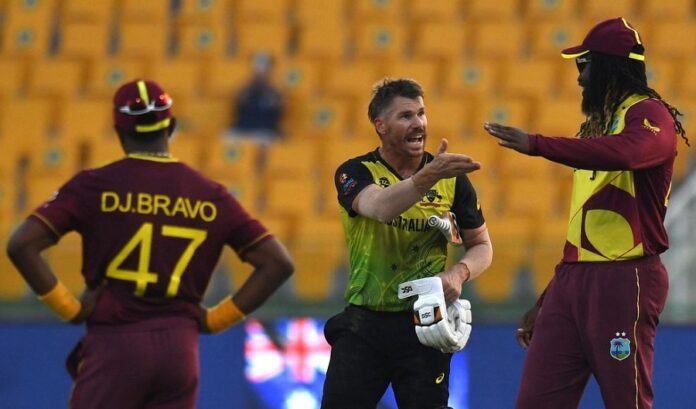 Australia beat West Indies in their final Super 12 match, with the win putting them in a good position to make the ICC Men’s T20 World Cup 2021 semi-final.

Half-centuries for David Warner and Mitchell Marsh, and four wickets for Josh Hazlewood made it four wins in five matches for Australia in Group 1.

The win took them to second in the group, equal on points with England. While they will have to wait for the result of the England v South Africa match before they can confirm their place in the semi-final, a healthy net run rate has put them in a good position.

For West Indies, it was an emotional end to their title defence. The two-time champions showed glimpses of their era-defining T20 batting as they bid farewell to Dwayne Bravo and potentially Chris Gayle. However, they finished their ICC Men’s T20 World Cup 2021 campaign with only one win in the Super 12 stage.

With 157/7 on the board after they were asked to bat first, West Indies would have been cautiously optimistic. After a guard of honour for Bravo, they handed the new ball to Akeal Hosein and gave him close-in fielders right under the eyeline of the batters. The plan worked, with Aaron Finch chopping on when the left-hand spinner came back for his second over.

However, they had little else to celebrate. Warner was in fine touch. Having got going with a four off an errant Roston Chase, he used the extra bounce from Jason Holder to reel off two fours and a six. He welcomed Dwayne Bravo with a lofted drive and slog-swept Hosein over the ropes.

His third six, this time over midwicket, got him close to his fifty, before a scampered two brought up the landmark in just 29 balls.

Marsh into the attack

The duo of Marsh and Warner did not slow down after the fielding restrictions were eased either. The asking rate was well in control at the drinks break, with 60 needed off 60 balls.

Marsh offered good support to Warner, striking a couple of blows that sailed over the ropes. A couple of fours off Holder got Marsh close to his half-century, which came in 28 balls.

Bravo’s final over in international cricket was smashed for 17 runs, including a big six over square leg for Warner.

Chris Gayle took the ball with eight needed, and offered some late entertainment. He nearly had a stumping and had Marsh caught at mid-off with his last ball.

It was left to Warner to finish the game with a four off his pads.

Earlier, a familiar name at the top of the order was responsible for West Indies’ strong start after they were asked to bat.

Unlike Bravo, who had clarified that this match would serve as his last outing in maroon, Gayle had not made clear his plans for international retirement. Yet, when the West Indies legend walked off the field after a short but entertaining innings, raising his bat to the crowd, congratulated by his colleagues and soaking in the well-earned admiration, it suggested this was his farewell match too.

His 15 off nine balls had plenty of the typical Gayle flourish. The two-time T20 World Cup champion, batting in shades under his helmet, saw out Mitchell Starc in the first over, before striking two sixes. He pulled Hazlewood and then, two balls later, smashed a back-of-a-length delivery from Pat Cummins down the ground off the back foot.

The entertainment was short-lived, though. The very next ball, he chopped onto his stumps.

West Indies, whose attacking batting approach has not always worked in this tournament, especially when asked to bat first, came out swinging.

Evin Lewis took Hazlewood for two back-to-back leg-side fours before lofting him down the ground for a third. Gayle then added to the bowler’s pain, as the second over went for 20 runs.

Hazlewood came back strongly: Bowling good length, he had Nicholas Pooran caught before Roston Chase was done in by slight movement that knocked his off stump.

But with the in-form Shimron Hetmyer and Lewis in the middle, the men in maroon comfortably posted 50 in the Powerplay.

Pollard at the finish

The West Indies enjoyed a couple of handy partnerships in the middle overs, even as Australia kept chipping away.

Bravo and Kieron Pollard set themselves up to launch at the death. The duo added 35 in 28 balls, with the skipper leading the scoring.

Bravo saw out Starc yorkers to drive him over extra cover for a six, but was caught in the deep going for another big shot off Hazlewood. His last innings for West Indies was worth 10 runs, and he walked off to applause from the audience, hugs from his team-mates and respect from the opposition.

Pollard fell short of his half-century, but his 44 off 31 balls and two sixes in the final over by Andre Russell pushed West Indies past 150. But against a marauding Warner, it wasn’t enough for a win.