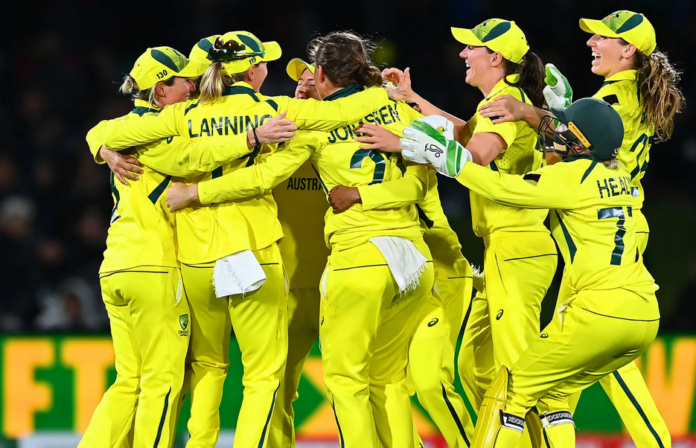 Australia were crowned the champions of the 2022 ICC Women’s Cricket World Cup after beating England by 71 runs in Christchurch on Sunday.

Australia were crowned the winners of the 2022 ICC Women’s Cricket World Cup, winning their seventh title. The bowlers did a splendid job to bowl England out for 285, despite an impressive century from Nat Sciver. Earlier, Alyssa Healy’s sensational 170 had helped Australia to a score of 356/5.

Megan Schutt gave Australia the perfect start in their defence of 357 in the Final. Bowling an absolute peach of a delivery, the inswinger was too good for Danni Wyatt, as she was bowled for just 4.

Her opening partner, Tammy Beaumont, looked in sizzling touch, taking the attack to the Australian pacers. She was severe whenever the Australian bowlers erred in line and length, smacking away five boundaries.

Schutt though struck again, trapping Beaumont plumb in front of the stumps to get her prized scalp for 27 as England found themselves reeling at 38/2.

Skipper Heather Knight joined by Sciver, stitched together a 48-run partnership, steering England out of troubled waters. Alana King then worked her magic again in the 15th over of the innings. Australia first thought they had the wicket of Sciver, but the LBW decision was overturned after a review. Heather Knight wasn’t so lucky, being lbw in the sixth delivery of the same over, walking back for 26.

With the required rate mounting, Amy Jones went for a big hit against Jess Jonassen, leading to her downfall. Jonassen set the trap up perfectly, bringing the field up and Jones could not resist a big hit, failing to get the requisite connection, bringing an end to her knock of 20.

Sciver would bring up her fifty, but England had a mountain to climb in the remainder of their innings.

Sophia Dunkley would be the next to depart, with King striking again with a bamboozling delivery, bowling her around the legs for 23. Katherine Brunt too would succumb against King, charging down the track but failing to make any contact as Healy did the job behind the stumps. She had to walk back for 1.

Sophie Ecclestone also did not last long, with Tahlia McGrath trapping her in front of the stumps for 3 with Australia edging ever so closer to their seventh title. Jonassen took her second scalp of the match, taking a magnificent caught and bowled off her own bowling, to send Kate Cross packing for 2.

Sciver though would keep on fighting, bringing up her second century of the 2022 World Cup against the same opponent. She would be brilliantly supported by Charlie Dean, as the pair embarked on a 65-run stand.

Dean’s knock of 21 would finally end as Ash Gardner as a misguided reverse-sweep was caught at short third by Jess Jonassen. Australia’s moment of glory finally arrived in the 44th over, as Anya Shrubsole holed out to Jonassen off the bowling of Gardner, Meg Lanning’s troops erupting in joy. It was a brilliant knock by Sciver, who remained unbeaten at 148, to register the third-highest ever score in a 50-over World Cup final.

Earlier, Healy was in cheat mode throughout as she amassed an amazing 170 from just 138 deliveries as Australia registered a whopping 356/5 from their 50 overs after being sent into bat first at Hagley Oval.

The right-hander enjoyed a 160-run opening partnership with Rachael Haynes (68 off 93 balls) and then an even more dynamic stand of 156 with Beth Mooney (62 off 47 balls) as Australia’s imperious top-order put England’s experienced bowling line-up to the sword.

No England bowler was spared, bar veteran seamer Shrubsole (3/46) who worked tirelessly throughout to pick up three wickets, including the big one of Healy.

Even in-form spinner and the leading wicket-taker at the tournament Ecclestone (1/71) was expensive, while Brunt (0/69), Sciver (0/65), Cross (0/65) and Dean (0/34) all went wicketless. Their bowlers weren’t helped by some sloppy fielding, with Sciver dropping Healy when she was on 41 and the score on just 95 and Haynes receiving a life in the same Cross over.

And didn’t they make them pay, with Healy in particular letting loose on some ordinary bowling throughout to post her highest ODI score and the largest score ever by man or woman in a World Cup final.

The 32-year-old found the boundary a total of 26 times during her entertaining stay, continually pouncing on anything short and even finding time to get inventive with a bevy of scoop shots. England did manage to pick up a handful of late wickets to help reduce the pain, but it mattered little as Healy’s big score ensured Australia had enough runs on the board.