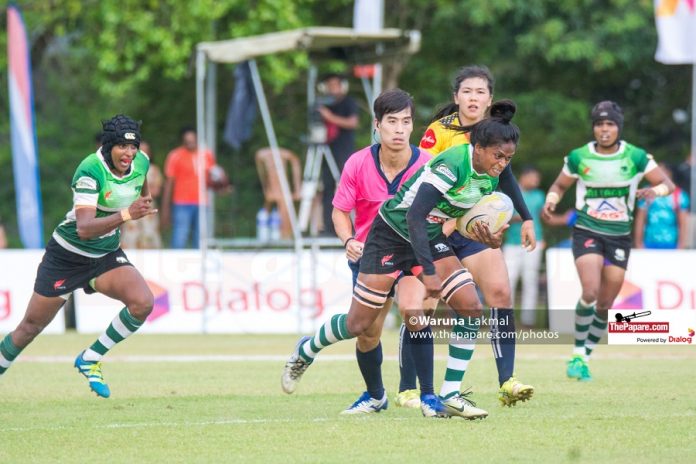 Sri Lanka women’s Rugby team finished at 5th place as they beat Thailand by 7 points to 5 in a nail- biting 5th place playoff a short while ago at the Race course grounds.

After the first match loss to the big guns, Hong Kong, the Sri Lankan Women…

Thailand was on the attack in most parts of the first half but the hosts were strong in their defense as they remained patient for an opportunity which came in the 4th minute. It was skipper Sanjeewani Wijethilake who took the quick tap and ran all the way to score under the post. Ayesha Kaluarachchi added the extras.

Towards the latter part of the first half, Thailand was given chances but they failed to make it count.

Second half was similar with Thailand dominating possession and  Sri Lanka handing back possession whenever they got the ball in hand. It almost looked like they held back and decided to defend the 7 point lead they had which was nothing big in 7s rugby. To put few jitters on the Sri Lankan camp, Thailand scored a try with Thanaporn Huankid who touched down with 2 minutes remaining on the clock, drawing back the deficit to just 2 points.

In the final minute, the hosts handed the ball back to Thailand and in the process were down to 6 players when  Thanuja Weerakkody received a yellow card. However, Thailand failed to capitalize and the Sri Lanka Women’s rugby team held on to a well-deserved victory and the 5th spot in the series. 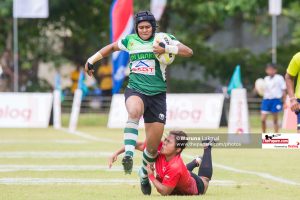 A dominant performance from the Sri Lanka women’s team saw them secure their spot in the plate final beating Singapore by 40 points to nil a short while ago.

Thanuja Weerakkody started things off with a try from the kick off for the hosts. Her speed down the line was too much for the sweeper as she ran from the half way mark to the try line. It was followed up by another converted try by Theekshana Liyanage who initially ran across on the 22m and eventually spotted a gap to burst through and score under the post. Both tries were converted by Ayesha Kaluarachchi.

The Lady Tuskers kept on the pressure as the third try came from Ayesha Perera who was given too much space which allowed her to step on the gas and run all the way to score the third try of the game. Kaluarachchi added the extras once again. Seconds before the half time, the two Ayesha’s combined to extend the lead with another converted try as Perera touched down and Kaluarachchi converted

Second half was pretty much the similar story for the Singaporeans who conceded too many handling errors which made life easier for the hosts.  Skipper Sanjeewani Wijethilake got into the act with the 5th try for the Lady Tuskers. It was a loose ball on the half way mark and she just gathered it and burst through to score under the post. Singapore managed to get inside their attacking 22 in the second half but the hosts managed to hold onto the clean sheet.

Minutes before the final whistle, Wasana Weerakkody broke through the sweeper to score the 6th try and seal a much deserved victory for the Lady Tuskers. They will be facing Thailand in the plate final at 16:28H SL time. 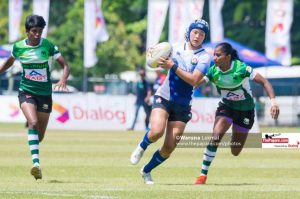 Dilrukshi Nehelmage kick started the match right away, hoping to put the opposition under immediate pressure. However, after a few phases Yume Okuroda hit through the gap between two defenders and off loaded the ball to Tomomi Kosoza who scored Japan’s first try easily under the post. Emii Tanaka added the extra two putting Japan Seven points ahead four minutes into the game. The second try came in quick succession as the Japanese women showed tremendous pace forcing an overlap in the left corner where Hana Nagata touched down for Japan giving them a 12 – 00 lead at the half time.

Japan kicked started the second half deep inside Sri Lanka’s half putting the local girls under pressure after defending in with some dashing tackles. Unfortunately, Sri Lanka knocked the ball on awarding a scrum to Japan, and it was Rihino Kurogi who dragged 3 defenders to go all the way and touch down in the left corner. The conversion was unsuccessful.

Japan was too good at the breakdowns as Sri Lanka conceded too many penalties giving away possession. Playing it quick, the Japanese scored once again through Raichelmiyo Bativakalolo who outran her opposition and jotted the ball down in the left corner. The last two minutes of the game saw Sri Lankan skipper Sanjeewani being sent out to the ‘sin bin’ for intentionally kicking the ball away and right away the Japan’s Rihiho Kurogi took a quick tap and went under the post to score her second try of the game. Yume Okuroda added the extra two points as the game came to an end.

Japan secured a 29 – 00 victory and will play in the Cup semi-final whilst Sri Lanka will play Singapore in the Plate semi-final at 1.18p.m.