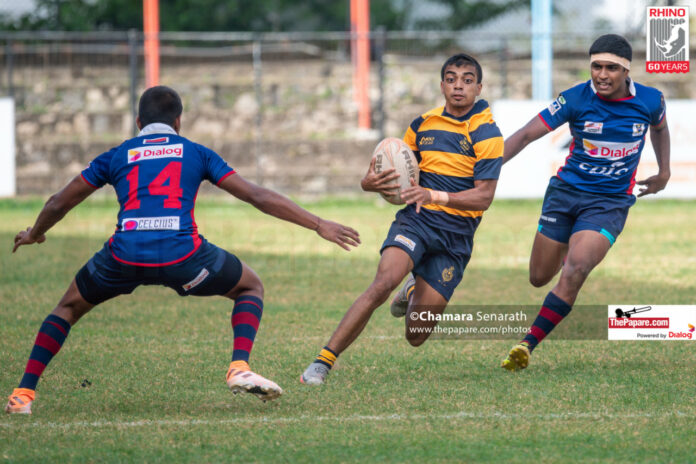 Royal College scored a whopping eight tries as they crushed Kingswood College by 53 points to nil in their Dialog Schools Rugby League 2022 game played at the Royal Sports Complex on Saturday.

The defending champions, who are coming from a decent outing against St Anthony’s College last week, brought out their big guns to make a statement early in the 2022 season.

Kingswood College were no match to the physicality shown by the Royal forwards, as they were scrambling in defense during most parts of the game. Royal College used their big forwards and the skiddy backline to run riot from the opening whistle, as they became the first team go past the 50-point mark in the season.

It all started in the 13th minute when center Kaveen Sasanga, who received the ball from the line out, bumped off a couple of tackles to break the deadlock. Full-back Nabil Yahiya added the extras and a few minutes later, he added another 3-pointer to extend the lead.

The second try came after fly-half Thivain Perera executed a brilliant touch-finder from the half line. A few phases from the line out, number eight Navin Perera barged over the defense to score. Before the Kingswood boys could catch their breath, Sasanga scored his second try. It was broken play and the scramble defense of Kingswood was no match for the Royal Center, who shrugged off few tackles and went under the post. Yahiya added the extras. (RC 18 – 0 KCK)

The bonus point try was secured by the hosts in the 31st minute through prop forward Shenal Adhikaram. Initially, half-back Hasnaka Higgoda used his nippy feet to pierce through the Kingswood defense. Then, the Royal College forwards got to work barraging hit after hit until Adhikaram landed the killer blow in the whitewash.

Just when the boys from Randle Hills thought the carnage was over before the break, Royal struck once again through winger Pasindu Heshan, who ran around the defense and found the try line.

The visitors would have loved to find some consolation in the second half, but it wasn’t meant to be. However, they had nothing but themselves to blame, since they failed to show confidence or the fight to push back the home side. Their set pieces were disappointing and the decision making of the key players were not the best. The Royal storm was simply too hot to handle.

Meanwhile, Royal College did not let loose. Their sixth try came 10 minutes into the second half. Kingswood were indecisive under a high ball and after letting it bounce, lock forward Rahil Wijesekara gathered it and bulldozed a couple of Kingswood players on his way to the try line. The tries kept coming as replacements joined in the party. Replacement prop forward Supun Gamlath was the try scorer here when he pounced on a few missed tackles to put his name in the scoresheet.

The score-line could have been much worse if not for a few errors that crept in to Royal’s game. Their line-outs were near perfect in the first half, but in the second half, few were crooked. There were a few handling errors from the hosts inside the final third, which costs them a couple more tries. However, before the final whistle, the cherry on the cake was kept by Heshan. Taking a quick tap on the 22, the winger stepped on the gas to score under the post. Yahiya converted all three tries in the second half to seal a morale boosting victory.