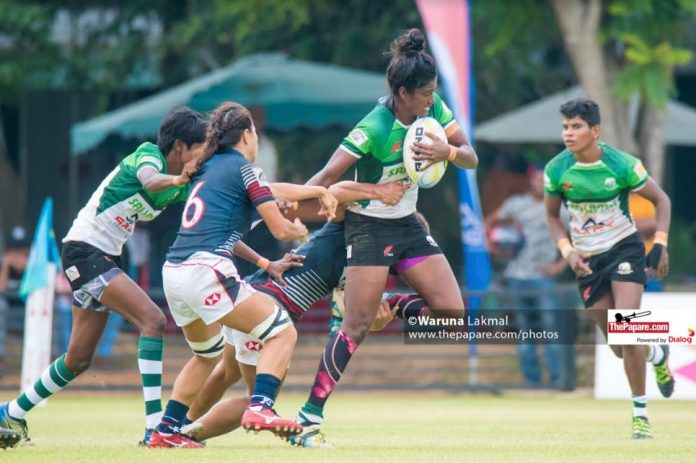 After the first match loss to the big guns, Hong Kong, the Sri Lankan Women were off to a flying start in their second game against Korea as the local girls recollected the ball from the kick-off and found themselves inside the Korean red zone.


After three phases of play, the ‘Ayesha’ duo sparked things up as Ayesha Perera’s initial breakthrough saw Ayesha Kaluarachchi under the post for Sri Lanka’s first try. She converted her own try adding the extra two.

The next few minutes saw both teams desperately trying to breach their opposition’s defense line, but the wet conditions and outfield hindered the pace of the game.

However, Korea found their first good break at the brink of half time through the big #7 Suelgi Gwon who started and finished a wonderful attacking move for Korea. After barging straight through the defenders, Gwon stretched out and reached for the whitewash as the ball nudged the line putting 5 points for Korea on the scoreboard. As the conversion kick drifted away on the upright, the referee blew the half time whistle.

The second half got underway as the senior campaigners for Sri Lanka Thanuja Weerakkody and try scorer Ayesha Kaluarachchi dominated the game with their individual brilliance scoring two tries apiece. It was Thanuja who extended Sri Lanka’s lead first after making a scintillating run from over the 60-meter mark. She sensed a gap in the Korean defense and fended well to push straight over the try line. Two minutes later, Weerakkody once again torched the touchline going over for her second try as Kaluarachchi added the extra two.

Trying to fight back was the lone warrior of Korea Suelgi Gwon. She made another dashing break and scored Korea’s second try. The conversion attempt was unsuccessful as Korea jumped 10 points up. However, wrapping things up for Sri Lanka was Kaluarcachchi who completed a wonderful game scoring her second try in the final minute. She dummied a pass and foxed the defenders as she sneaked through the space ending up under the post. She converted her own try as the referee blew the final whistle securing Sri Lanka’s victory.

Stay logged with ThePapare.com for live and exclusive coverage of the final leg in the Asia Rugby Sevens Series.

Hong Kong secured a 29 points to nil victory against Sri Lanka in their opening match at the Racecourse Rugby Stadium. The scores read 7-0 at half time in favour of Hong Kong.

Sri Lanka kick started the game hoping to beat their arch rivals Hong Kong and qualify for the World Sevens Series qualifiers, but right from the start Hong Kong were struggling to find the white-wash as the home team defended their hearts out for almost the whole first half. However, it was only until Sau Yan Kwong made a dashing run in the 7th minute after slicing through the centre channels in the Sri Lankan defence line and touched down beside the post. Colleen Tjosvold added the extras giving Hong Kong a 7 point lead in the first half.

The second half got underway in favour of Hong Kong as they started things off from where they left off in the first half. After sucking in defenders and creating that overlap in the far corner, Natasha Olsen found herself scoring Hong Kong’s second try after running around the Sri Lankan winger. Colleen failed to add the extras.

It looked as if Hong Kong finally found their rhythm, scoring two tries in quick succession putting Sri Lanka under immense pressure. Stephanie Chang was the third try scorer for Hong Kong after running a perfect supporting angle and stepping away from the defenders to jot the ball down over the whitewash on the far side. Scoring her second try right from the restart was, Sau Yan Kwong who played a penalty quick and danced her way over to the try line. Although Colleen was unsuccessful in converting in the first occasion, she managed to add the extras the second time around extending Hong Kong’s lead by 24 points to nil.

As the game neared its end, Hong Kong managed to add another five pointer through Lindsay Varty, who picked the ball from the back of the breakdown and stretched over to score Hong Kong’s final try. As Colleens kick went astray the referee blew the final whistle confirming Hong Kong’s victory.

The Sri Lankan men will play China in their next match at 3.42p.m. Stay logged with ThePapare.com for live and exclusive coverage.