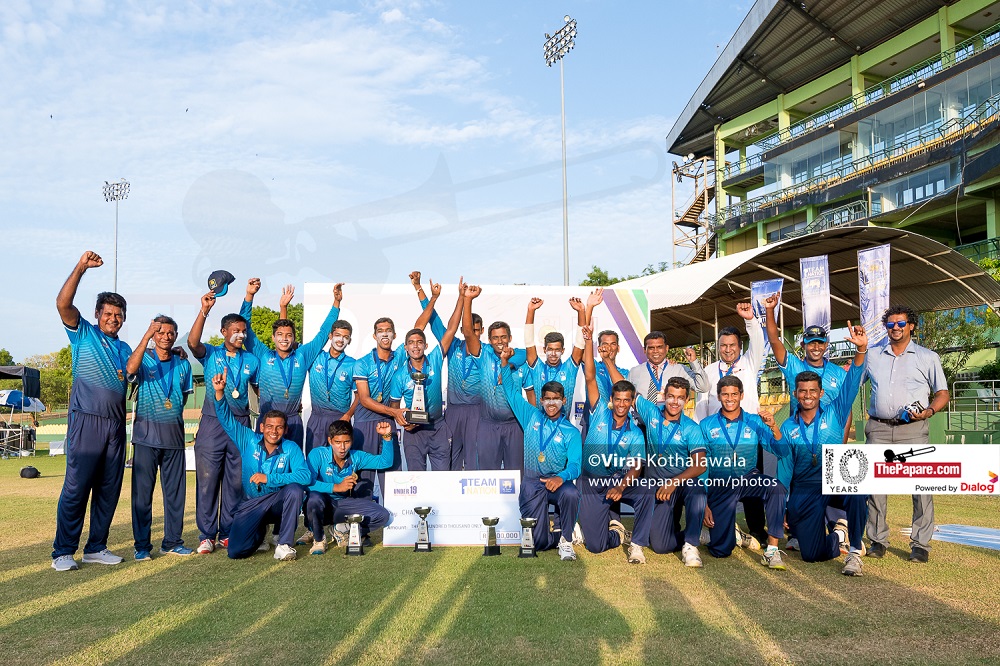 The final of the U19 Super Provincial Tournament was held today between Team Colombo and Team Dambulla at Rangiri Dambulu International Stadium closing the 4-team tournament crowning Team Colombo as worthy champions.

Team Colombo skipper Kamil Mishara won the toss and decided to bat first in the all-important final battle against Team Dambulla which is led by Sri Lanka U19 skipper Nipuna Dananjaya.

Colombo U19s opener Mohammed Shamaaz couldn’t continue his good form as he was dismissed cheaply for 14. After the falling of the 1st wicket, Royal duo Kamil Mishara and Ahan Wickramasinghe joined in the middle for a mouth watering 2nd wicket partnership of 161 runs in 26 overs.

Mishara who has already scored 152 & 97 in previous two innings, went past another century to seal his dominance in the batting charts. His stay for 120 runs off 114 balls included 10 fours and 6 huge sixes.

Skipper was well supported by Ahan Wickramasinghe who remained unbeaten at the end of the innings. Later in the innings, he took over the aggressor’s role and propelled Team Colombo to 303 with a sensational century (127 off 116 balls).

Team Dambulla got off to a flying start with their skipper Nipuna Dananjaya and Sumudu Sumanarathne blasting 50 runs in the first 5 overs but had to put brakes with the constant fall of wickets.

Exciting wrist spinner Dilmin Rathnayake who snatched 4 wickets in the previous match against the same opposition, strangled the Dambulla batting lineup with another 4-fer to take them far from required rate.

Later in the Dambulla innings, Joes duo Dineth Jayakody and Lakshan Gamage put on a promising partnership of 91 runs to light up the hopes of a great comeback with 2 fighting half centuries but failed to deliver with the ever-increasing required run rate.

Colombo dismissed Team Dambulla for 242 within 43 overs to win the championship and remain unbeaten in the tournament.