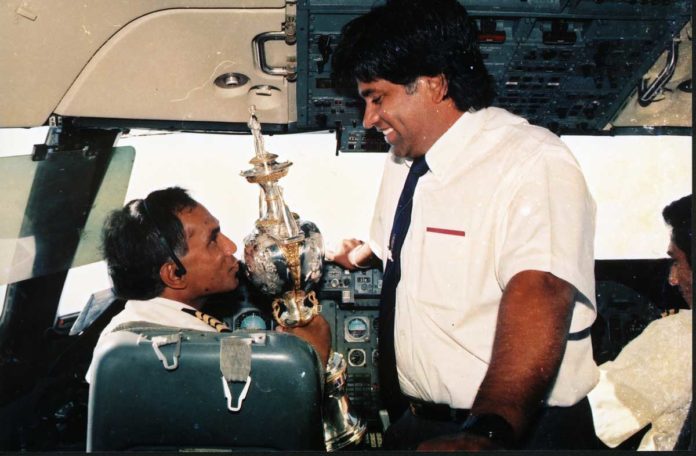 The numbers of Kumar Sangakkara are so splendid that it would be a feather in anyone’s cap if they are able to end their careers having done better than him.

Read – Flight back home from Lahore

There is Angelo Mathews breathing down his neck with an ODI average of 41.94. Sanga averaged 41.96. The challenge for Mathews is to get better with age, which Sanga did so well. His best years in cricket were his last couple. His Test average of 57 of course is out of the equation and it will take a long time for anyone to get close to it.

Today we are going to discuss the career of someone who finished with an ODI average of 64 although he played only a handful of games. Nevertheless, they were historic ones but do not get the credit they deserve.  Sunil Wettimuny is his name.

Wettimuny scored Sri Lanka’s maiden half-century in ODI cricket – in the inaugural World Cup in 1975, against Ian Chappell’s Aussies. Four years later, he scored his last – in the 1979 World Cup against a star-studded Indian side, who Sri Lanka beat. This win eventually paved the way for Test status for the nation.

Sunil is the eldest of five sons of Ramsay Wettimuny, a double Chartered Engineer (civil and mechanical) and a prolific writer on Buddhism. Ramsay also loved cricket. He built Sri Lanka’s first ever indoor nets and hired the country’s best coach at that point – Bertie Wijesinhe – and handed his sons to him to be taught the finer points of the game. Three of his sons went on to play for Sri Lanka – Sunil, Mithra and Sidath. But he wasn’t lucky to see any of them play as he passed away a year before the 1975 World Cup at the age of 49.

Sunil never played Test cricket though. He was one of the leading contenders to play the inaugural Test match but was denied the chance on grounds that you tend to think now were flimsy. After being called up to play the nation’s first Test match, Sunil requested that he be granted duty leave. He was a pilot. But his employer Air Lanka were not too keen to grant duty leave as it would be breaking protocol. The matter was then taken to the President of the Board of Control for Cricket – Gamini Dissanayake – who was one of the top Ministers of the UNP government at that point.

Dissanayake directly approached President J.R. Jayewardene, who himself was a sportsman of repute having played the Royal – Thomian Big Match and captained Royal in the Bradby Shield. J.R. was also a former President of the Board of Control for Cricket. While being over the moon for the nation being granted Test status, J.R. indicated his unwillingness to intervene to get Sunil the duty leave as it would set a bad precedence.  The President’s aspirations to bring Air Lanka on par with Singapore Airlines meant he wasn’t willing to compromise. So Sunil missed out on not only playing the inaugural Test match but never played the longer format of the game.

There is a school of thought that the Test captaincy for the inaugural Test was in fact offered to Sunil. There are others who argue that there was no question of Bandula Warnapura being the leader of the team having captained Sri Lanka in the win over India in 1979 in the absence of Anura Tennekoon.

Sunil was one of the finest technicians to play the game of cricket. All Wettimunys were. Sidath and Mithra opened batting for Sri Lanka during the tour of New Zealand in 1983, the team’s first tour beyond the sub-continent.

Sunil boldly put up with the thunderbolts of Jeff Thompson and Dennis  Lillee on his way to record Sri Lanka’s maiden half-century in ODIs. He eventually retired hurt after being repeatedly hit on the foot by Thompson. Duleep Mendis had been forced to retire before him. Sunil was the eye-witness when a London cop doing the hospital rounds came up to Mendis and asked whether he intended to press charges against Mr. Thompson!

It was Sunil who flew the World Cup winning Sri Lankan cricket team home from Lahore in 1996. Former Board Secretary S. Skandakumar and former St. Peter’s  captain Bernard Wijetunga, who were working for George Steuarts had hastily arranged a chartered flight from  Colombo to Lahore and back to take some keen cricket fans and VVIPs to witness the World Cup finals. The team had separate flight arrangements done by the PILCOM – Pakistan, India and Lanka Committee – the organizing arm of the 1996 World Cup. But the team wanted to return to Colombo the night they had won the World Cup. That was a request that Sunil could not turn down. He may have cheated on the load sheet of that flight though.

Sunil lives in Germany currently, but his work is based in Seoul, South Korea. Like his father, he is a keen follower of Buddhism and spends hours in meditation. He is 71. We intend to hear from him in our Legends segment, soon!