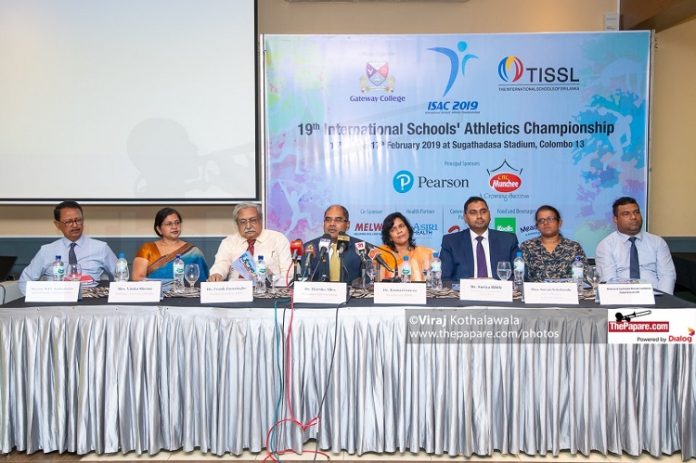 The International Schools Athletic Championship (ISAC), a brainchild of Late Dr. R T Alles, will see its 19th edition being worked out at the Sugathadasa Stadium, from the 15th to 17th February 2019.

The ISAC is conducted in accordance with the competition rules and regulations of both TISSL as well as the International Association of Athletic Federations (IAAF) and will include electronic timing and measurements. The competition will see the participation of over 1500 athletes representing the 22-member institutions of TISSL, competing in 162 events across 5 age groups. They will be judged by 300 technical officials per the rules of the Amateur Athletic Association of Sri Lanka. Each competitor will also be given a unique Identity Card by TISSL for easy identification.

Lyceum Wattala has been the most dominant competitor in the recent years, having led the overall medal tally for the past 9 years, but will face stiff competition from Gateway Colombo and Lyceum Nugegoda, who have routinely ended up in the second and third place respectively.

Speaking at the media briefing regarding ISAC 2019, Dr. Harsha Alles, Chairman of ISAC 2019 and the Chairman of the Gateway Group, said “Over the years, ISAC has become an important event that not only breeds talented athletes but also showcases junior athletes of international repute. There is no doubt that the event is of national significance. Since the inaugural competition, the standard of Athletics among International schools has now reached national and international levels, providing much required competition at the highest levels. Athletes of the caliber of Shelinda Jansen, Sadeepa Henderson, Sachini Divyanjalee and Kavindu Bandara are few such examples who will be competing at the event.”

Watch this space as ThePapare.com will be bringing you previews, photos and reports of the 19th International Schools’ Athletic Championship.