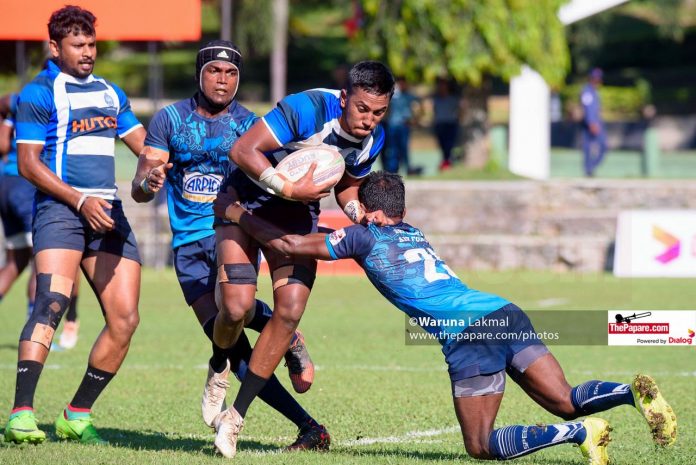 Navy SC survived from a near defeat against a resilient Air Force team who led 6 points to 5 at half time. However, a late surge in the second half proved enough for the Sailors, as they managed to secure a 18 – 17 victory at Welisara, earlier today.

Thilina Weerasinghe kick started the game from right to left, with a deep kick inside the opposition half. However, not learning from past mistakes, Navy, leaked penalties from the start allowing Charith Senevirathna to draw first blood for Air Force within the first 5 minutes. Thereon, the home team was under immense pressure, especially with the Fijian Raduva Kauooso hitting their defence lines upfront and hard.

Sensing the need for points, Buddhima Piyarathna made a good break in the far corner evading over 3 defenders. After doing the hard work, he offloaded to skipper, Thilina Weerasinghe who finished the move diving over the whitewash, putting Navy in the lead. But Weerasinghe’s missed conversion came to haunt the Sailors at half-time, as Charith Senevirathna slotted another 3 pointer ten minutes before lemons.

Second-half action began with the Sailors’ falling into deeper trouble. Scrum-half, Harsha Maduranga was sent off for a high-tackle which led to the Airmen’s first try. After setting up a steady maul five meters away from the try line, Parakkrama Rathnayake went over the white wash extending his team’s lead, with the numerical advantage in play, Gayantha Iddamalgoda scored another 3 pointer just before Navy got back to full strength.

The final quarter of the game saw the tables turn in favour of the home team, as they managed to score two tries in quick succession. Replacement prop, Viraj Colombaarachchige scored an easy try in his first touch, barging from the back of a ruck from 5 meters away, while Buddhima Piyarathna went over for a try 5 minutes later.  With both conversions going astray, Navy only held a one point lead with 10 minutes remaining. Rising to the occasion Soorya Krishan put Air Force back in the lead with a drop goal keeping his teams hopes for a win alive.

Indiscipline by the visitors led to their downfall – as Navy was awarded a penalty right in front of the uprights at the brink of full time. Chathura Senevirathna put his hand up as he successfully bisected the posts snatching victory from Air Force.