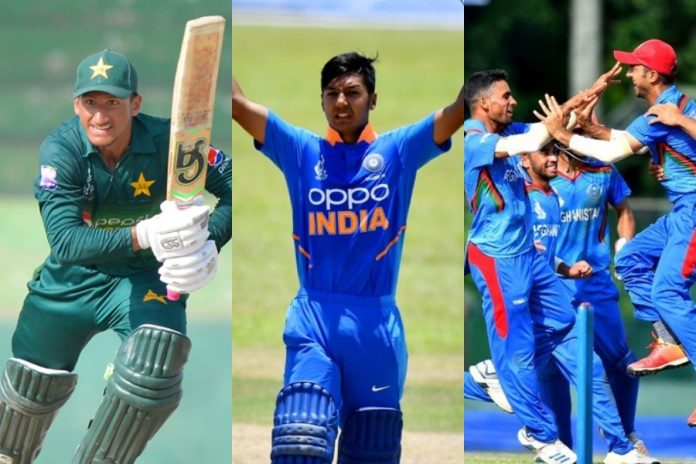 Defending champions India and Afghanistan secured their places in the Semi Finals today as they registered victories against Pakistan and Kuwait respectively in the ACC U19 Asia Cup 2019.

Two games of the ongoing U19 Asia Cup were held in Colombo and Katunayake today, 6th September……

The arch-rivals met each other today at the De Zoysa Stadium in Moratuwa in a must-win game for the team in green as they had lost their opening game against Afghanistan. They were put in to field first by the Indian skipper Dhruv Jurel after he won the toss. Before that both teams observed a minute’s silence in memory of legendary Test leg-spinner Abdul Qadir who passed away yesterday in Lahore.

The stand-out of the Indian innings became the 183-run partnership between in-form opener Arjun Azad and Tilak Varma. The duo went on to score two 100’s for India as they set an ideal platform for the middle order to fire in the death overs.

Following Azad’s dismissal for 121 runs, Varma didn’t get sufficient support to keep the momentum going. Hence none of the other batsman scored more than 20 including the captain who got out for 10.

Taking full advantage of the opening the Pakistani bowlers restricted the Indians for 305 taking 9 wickets in 50 overs. The Indians were surely up for a much higher total before they collapsed towards the end. Atharva Ankolekar remained unbeaten on 16 off 9 deliveries for India, upon surrendering their innings.

Pakistani skipper Rohail Nazir was brilliant in the run-chase as he kept his team in contention until he was dismissed in the 40th over after walking in early in the 4th over. He scored 117 runs during which he was involved in a threatening partnership of 120 for the 4th wicket with Haris Khan.

Apart from Nazir and Khan, no one else could handle the Indian bowlers as they were all out for 245 in 46.4 overs. Ankolekar once again impressed, as he picked up 3 wickets with his left-arm spin.

India U19 won by 60 runs and advanced to the Semi Finals.

Afghanistan U19 vs Kuwait U19

Afghanistan had a very easy day at office as they thumped Kuwait by 7 wickets with 223 balls to spare at the R. Premadasa International Stadium in Colombo. Afghan skipper Farhan Zakhil needed just 27.3 overs to bowl out the Kuwait batsmen after he won the toss and elected to field first.

Man of the match against Pakistan, Shafiqullah Ghafari claimed 3 wickets once again with his leg breaks to lead the Afghan charge against Kuwait. The Afghans’ in reply chased down Kuwaits’ 85 in 12.5 overs losing 3 wickets. Captain Zakhil remained unbeaten on 38 after opening the innings.

Afghanistan U19 won by 7 wickets and advanced to the Semi Finals.