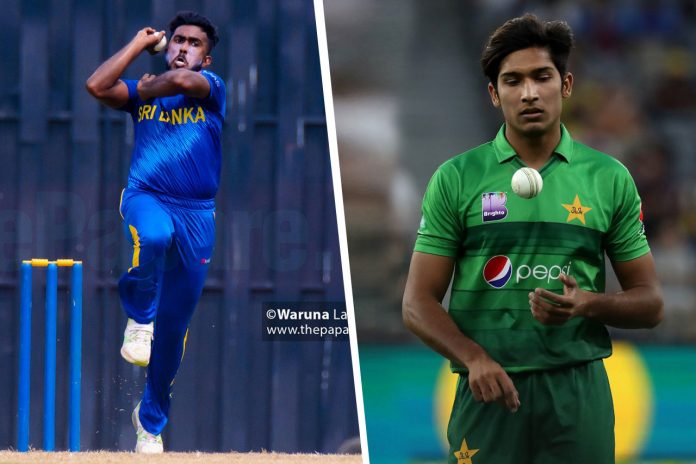 Reigning champions of the ACC Emerging Teams Asia Cup, Sri Lanka suffered their second consecutive loss of the tournament at the hands of Pakistan today at the Sheikh Kamal International Cricket Stadium in Cox’s Bazar, Bangladesh.

After failing to defend 268 in their opening game against Oman, the Lankans opted to field first with a XI which had undergone just 1 change in Hasitha Boyagoda replacing Sammu Ashan. The bowling attack which was sent on a leather hunt by the Omani batsmen a couple of days ago, seemed to have rectified their errors and looked really good against the Pakistanis.

The opening combination of Asitha Fernando and Kalana Perera provided Sri Lanka with a brilliant start, removing 3 Pakistani wickets for just 31 runs within the first powerplay. Pakistan were once again hit hard by a double strike as Amila Aponso removed their U19 skipper and in-form batsman Rohail Nazir for 37 which was followed by another wicket courtesy all-rounder Jehan Daniel.

From 82/5, the Pakistani lower order managed to add 101 vital runs to take them to a modest total of 183. The resurgence was piloted by all-rounders Amad Butt and Khushdil Shah who scored 44 and 32 respectively.

In bowling Fernando was the pick of the bowlers for Sri Lanka as he ended with figures of 3/28 in 9.5 overs. Left-arm bowlers Perera and Aponso picked up 2 wickets each while the all-rounder Daniel and Ramesh Mendis bowled out with 1 wicket apiece. Interestingly ambidextrous Kamindu Mendis’ bowling was not required today.

With a gettable total to chase down, the Lankans started poorly as they lost their first wicket for 15. They were quick to get back on course as Pathum Nissanka and Hasitha Boyagoda added 45 runs for the 2nd wicket. Following the dismissal of both the in-form batsmen, Sri Lanka was dealt another double blow which sent both their half-centurions in the previous game, Charith Asalanka and Ashen Bandara, back to the dressing room after a brief stand of 28.

Needing 94 more runs to win in 22 overs with 5 wickets in hand, Sri Lanka were still in the game with a very good chance of winning it as star batsman Kamindu Mendis was unbeaten on 19 with all-rounders Ramesh Mendis, Jehan Daniel and Kalana Perera yet to come.

Shockingly, the Lankan camp lost the 5 remaining wickets for just 4 runs within 16 deliveries handing Pakistan a 90-run win. With 3 wickets from the second half of the Lankan innings and 3 from the initial half, Pakistan national cap 19-year old Mohammad Hasnain ended with superb figures of 6/19 wrecking the Lankan batting order single handedly.


This defeat puts Sri Lanka in a must-win situation in their final group game against Afghanistan which is scheduled to be played at the same venue on the 18th of this month. Apart from beating Afghanistan, Sri Lanka will also have to rely on the result from the Pakistan vs Oman game to see if they progress.

Three more games of the tournament were played today,