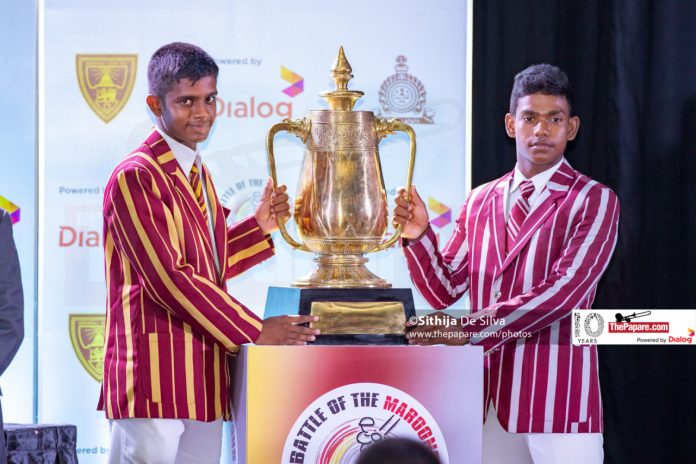 The 91st Battle of the Maroons between Ananda College and Nalanda College will be worked off at the SSC grounds, Colombo on the 7th and 8th of March.

Two of the most prestigious schools in the island which have produced the highest number of cricketers for the Sri Lanka national team (32 Test caps), will battle it out for glory to rewrite the history books at the dawn of the new decade.

Anandians have had the major honours in the history of the Battle of the Maroons but most of the battles have been concluded as no results.

History – The Battle of the Maroons

Last year the Ananda-Nalanda encounter was concluded as a draw with the Nalandians securing the 1st innings win in the contest.

The Kanishka Ranthilakage led Ananda College outfit didn’t have a great season this year as they lost 4 out of their 17 matches while winning first innings points in 7 draws.

Skipper Ranthilakage has been the star with the bat for Ananda College as he has topped the batting charts with 574 runs this season including 3 half centuries. Janindu Jayawardene is the only other batsman to achieve the 500-run mark this season.

Wrist spinner Isuru Ayesh can be considered as the trump card in the Ananda line up as he has dominated the wickets column with 54 scalps in 16 matches while Saviru Bandara and Deneth Nissanka have also put on impressive performances.

Under the leadership of Avishka Perera, the Nalandians have been exceptional throughout the 2019/20 School Cricket season, with a record of 4 outright wins while being unbeaten for 16 matches including 11 first innings wins (out of the 12 draws).

One of the few players to achieve the rare feat of 1000 runs this season, Nalandian skipper Avishka Perera has been a revelation to watch with his aggressive stroke play and ability to produce big innings. He managed to write his name in the folklore of the Battle of the Maroons with a century in the 90th encounter and will be raring to go with the added responsibility of being the captain.

Nalanda boasts a brigade of quality bowlers in the likes of Chamodya Rajapaksha and Dinesh Samaraweera while they have enough power in the all-rounder’s category as well. Raveen de Silva has served Nalanda well this season with the bat and ball while Chamindu Wijesinghe represented the Sri Lanka U19s in the recently concluded Youth World Cup in South Africa.

Considering the performance of the 2019/20 season, Nalandians undoubtably have the clear advantage in terms of recent form as most of their players have peaked at the end of the season and are firing from cylinders. But Ananda College do possess the quality to challenge the strong Nalanda line-up.

Watch the 91st Battle of the Maroons live on ThePapare.com, Dialog TV and MyTV from 9.00am onwards on the 7th and 8th of March.