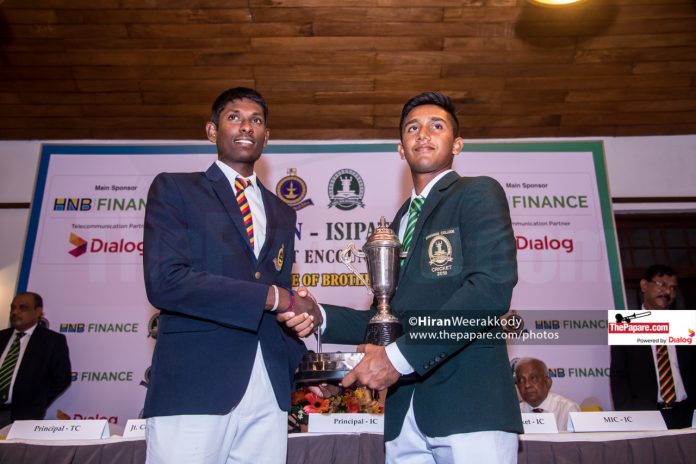 The annual showdown between Thurstan College and Isipathana College, also dubbed as “The Battle of the Brothers”, is set to be held for the 57th time on the 28th and 29th of February at Sinhalese Sports Club Grounds, Colombo.

Sandaru Dias led the Thurstanites to victory in last year’s encounter between the two teams, easing past Isipathana College with a 10-wicket victory and ending a 19-year-long unsuccessful streak. They did not stop there and went on to deliver the knockout punch in the One-day and T20 fixtures as well, securing the rare triple for Thurstan College. Isipathana College will be aware of the challenge they are going to face and will be aiming to break the winning spell of their opposition which began last year.

Obtaining a result has been rare in the history of the battle of the Brothers; in fact 46 out of 56 encounters have concluded as draws and the last time a result was produced before 2019 was in 1999, when Isipathana College won by 7 wickets under the leadership of Krishantha Jayawardene.

History – The Battle of the Brothers

Isipathana College has had the upper hand in the history of the encounter as they have managed to win 6 matches against the opposition, who have won only 4. Saman Nishantha (Isipathana College) secured the record for most individual runs in an innings in 2002 with his unbeaten 150, while former Sri Lanka Test player Nuwan Zoysa boasts the best bowling performance in the battle’s history with a 10-wicket haul, which he picked up in 1996.

Under the leadership of current captain Jayavihan Mahavithana, Thurstan College has an unbeaten record in the season as they won 3 matches out of the 13 they played, while drawing the rest.

Skipper Jayavihan Mahavithana has been the highest runs-scorer of the season so far, with 566 runs in 13 matches including 3 half centuries. Opener Yohan Liyanage chases him with 502 runs in the season, also having 46 wickets to his name.

Left-arm spinner Punthila Samantha Kumara can be picked out as the main trump of the Thurstanites as he has performed brilliantly throughout the season (65 wickets in 12 matches: six 5-fers).

Isipathana College could not form a good run  this season as the team, led by Leshan Amarasinghe, lost 3 matches out of the 15 they played, while managing to win only one.

Isipathana College’s main weapon will be all-rounder Savindu Uthsara, who was exceptional through out the season with both the bat and the ball. In 14 matches, he has registered more than 500 runs and 44 wickets.

Considering the form of both teams in the last 6 months, it is safe to say that Thurstan College possesses an advantage over Isipathana College; however there is enough potential in the Isipathana pool to pull off an upset.

The annual encounter will be livestreamed through ThePapare.com, Dialog TV and My TV platforms from 9.00 am onwards on the 28th and 29th of February. Keep logged in ThePapare.com for all the information you need on the 57th Battle of the Brothers.