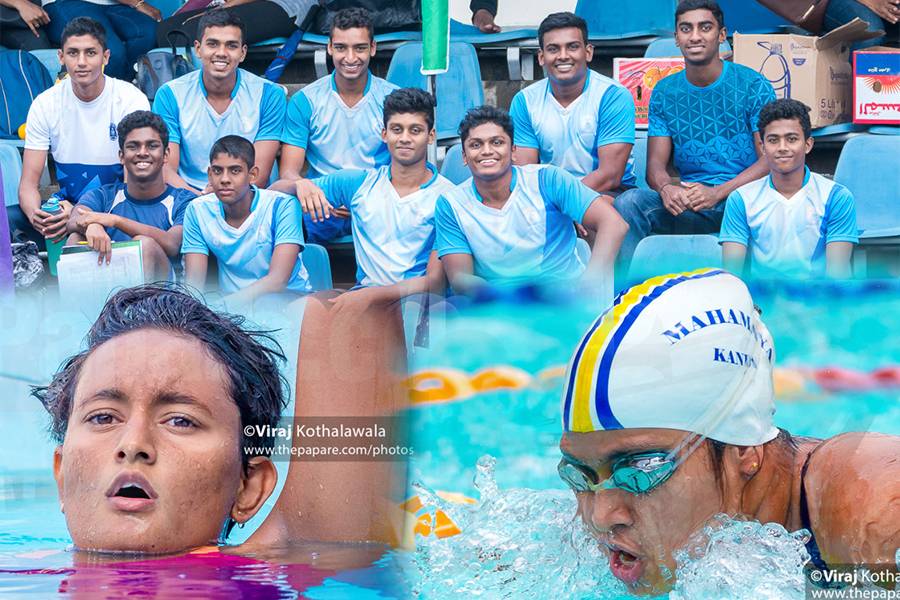 The defending champions of the Sri Lanka Schools Swimming Championship, Mahamaya and St. Joseph’s have turned on the jets as they power position themselves on the leaderboards at the end of day 3.

Winners of the Overall Girls title for 20 years, Mahamaya Girls College Kandy found themselves in the depths of despair after two days at the meet in 14th place out of 15. However, they have managed to turn things around to return to the top half of the standings to keep their sight on the title.

Visakha Vidyalaya will be looking to steal the Mayans’ victory, and have come back into the top spot of the standings with two days of action remaining.

It was a Joe-Pete battle in the top two spots of the Boys draw with the Peterites holding off the defending champions from the top spot. However, after a day of magnificent performances in the pool the Josephians are back to being top dog by a comfortable margin.

A total of 12 records have been renewed as the senior age groups kicked off today, 6th September at the Sugathadasa Pool.

Bakthi Karunasena of Colombo International School broke the Girls U18 50m Freestyle record with a timing of 28.50seconds, grabbing her first record at the meet.

National record holder Dilrukshi Perera of Hillwood College Kandy broke the Girls U20 50m Butterfly record of 32.33 seconds by her timing in the finals of 31.03 seconds.

Ramudi Samarakoon of Visakha Vidyalaya placed first in the Girls U18 100m Breaststroke event with a timing of 1:16.13min. This timing successfully renewed her own record which was established at last years’ meet.

Peterite Pramesh Cooray won the Boys U18 100m Breaststroke event with a timing of 1:10.40 minutes to renew the meet record.

M A Perera representing De Mazenod College, Kandana broke the meet record in the Boys U16 200m Backstroke event with a timing of 2:19.38min.

Ganga Seneviratne of Visakha Vidyalaya also grabbed her first record of the meet in the Girls U18 200m Backstroke event with a time of 2:31.26min in the final. She broke Vinoli Kaluarachchi’s record from 2017.

Shevinda De Silva of St. Joseph’s College clocked in 2:16.57 minutes in the Boys U18 200m Backstroke event to clinch Gold and set a record to his name.

Sandev Senarathna of Ananda College renewed the Boys U18 200m Butterfly meet record of 2:15.05 minutes with his superb lap of 2:13.32 minutes.

Lastly, S K S Biyanka from Dharmasoka College Ambalangoda clocked in a time of 2:48.44 minutes to win Gold and renew the record of the Girls U20 200m Butterfly event.

With two more days to go in the meet, the Josephians will look to hold on to their lead over the Peterites to retain their title for the 16th consecutive year. While Mahamaya College Kandy will need to dig deep and hard if they are to secure their title over a hungry Visakha pack.