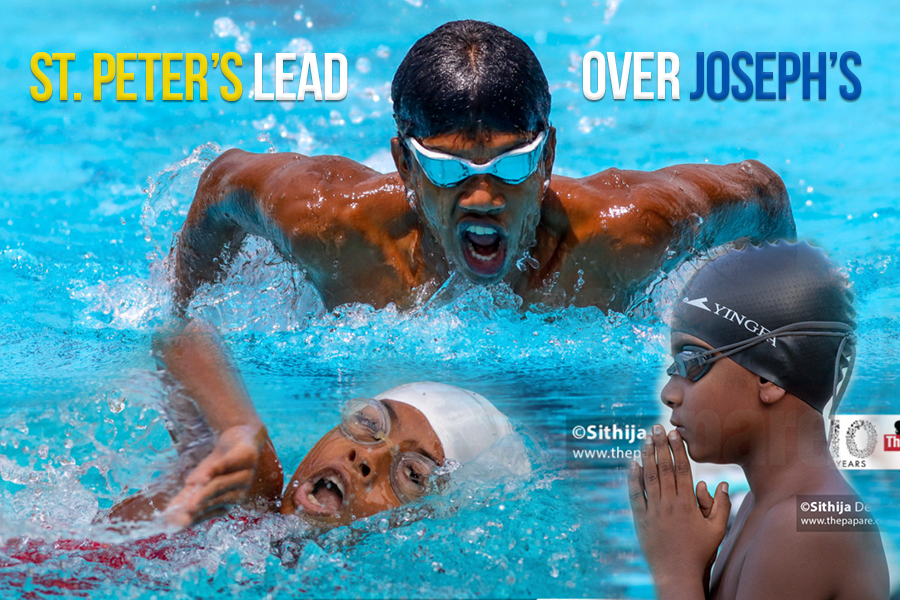 Visakha Vidyalaya was given a reality check after leading on the opening day, as the Girls’ swim crew of Lyceum International School, Wattala had a superb day in the pool to record a total of 69 points on Day 2.

In the Boys’ overall standings, St. Peter’s College have managed to stay ahead of the defending champions, St. Joseph’s College, for a second day running with 124 points. Another 9 records were established with 18 records in total at the end of the second day of the meet.

Hiruki De Silva grabbed herself a record in the Girls’ U16 200m Freestyle with a time of 2:19.54min surpassing the previous standing record (2:22.07) in a breeze. K V S Deenal of Kottawa North Dharmapala MV won the Boys’ U12 50m Breaststroke with a time of 39.92sec which was sufficient for a record.

The Girls’ U14 50m Butterfly event was won with a record by Nesha Rathnayake of Stafford International School, clocking 30.67 seconds. Thomas Sly of Asian Grammar School clocked in 1:19.64min to set a new record in the Boys’ U10 100m Freestyle.

I M Haathim of St. Peter’s College grabbed his second record in the Boys’ U10 100m Freestyle event.

The U12 Freestyle event also saw its records being renewed in both the Girls’ and Boys’ categories. Chanudi Kumarapperuma won the Girls’ event with a timing of 1:10.00min while Vihanga Caldera of St. Peter’s won the Boys’ clocking 1:05.19min.

Lyceum international School, Wattala stands ahead in the Girls rankings with 113 points as Visakha trail behind with 93. Sirimavo Bandaranaike Vidyalaya are in third place with 80 points.

St. Peter’s retained their lead over the Josephians with 124 points while St. Joseph’s are 20 points behind on 104. Lyceum International School Nugegoda are in third place with 77 points.