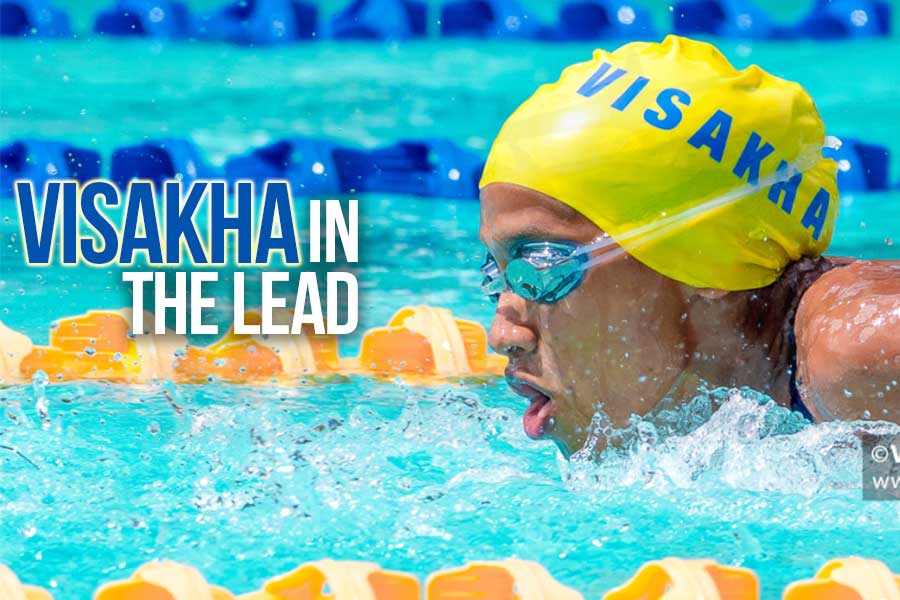 The Schools’ Swimming arena has been in dominated by the St. Joseph’s and Mahamaya swim crews for nearly two decades, with the two schools having won the overall title for 15 and 20 years respectively.

This year too, the two crews have turned up in numbers to retain their priced possession, but tough competition is expected from St. Peter’s, Lyceum International and Visakha Vidyalaya as they look to overthrow the reigning champions.

With the junior age groups starting off the meet, 9 schools’ records were shattered on day 1.

Vandani Fernando of Kalutara Balika Vidyalaya established a record in the Girls’ U12 50m Backstroke event. Her final lap of 38.18sec beat the previous record by 20ms and won her, her first Gold medal at this year’s meet.

In the Boys’ category of the same event, A. Siriwardena of Wesley College beat the previous record by a narrow but adequate lead of 0.6 seconds. He finished his final clocking 35.53seconds to win Gold.

Oneli Yahampath of Lyceum International School Nugegoda renewed the Girls’ U14 100m Fly record clocking 1:10.78min. Yahampath went on to clinch another record in the 200m IM event with a time of 2:41.68min.

Vihanga Caldera of St. Peter’s College clinched two gold medals along with two records on his first day at the meet. He clocked in at 1:12.11min in the Boys’ U12 100m Butterfly to smash the previous record of 1:16.04min.

Caldera also went on to renew the record in the U12 50m Freestyle with a time of 30.01sec to win his second Gold medal of the day.

S D Siriwardena of Princess of Wales won the Girls’ U14 100m Breaststroke event with a time of 1:23.17min. This timing was sufficient to topple the standing record of 1:24.04min set last year by Thinaya Jayarathne.

Bihandu Hansana of Sri Devananda College closed out the day with a record in the Boys’ U14 200m IM with a time of 2:31.49minutes.

St. Peter’s College are in the lead in the Boys’ overall team scores with 63 points on Day 1. St. Joseph’s College followed close behind with 61 points while Gateway hung on to third with 40 points.

Stay logged on to ThePapare.com for photos and results from the 46th Sri Lanka Schools’ Swimming Championship.