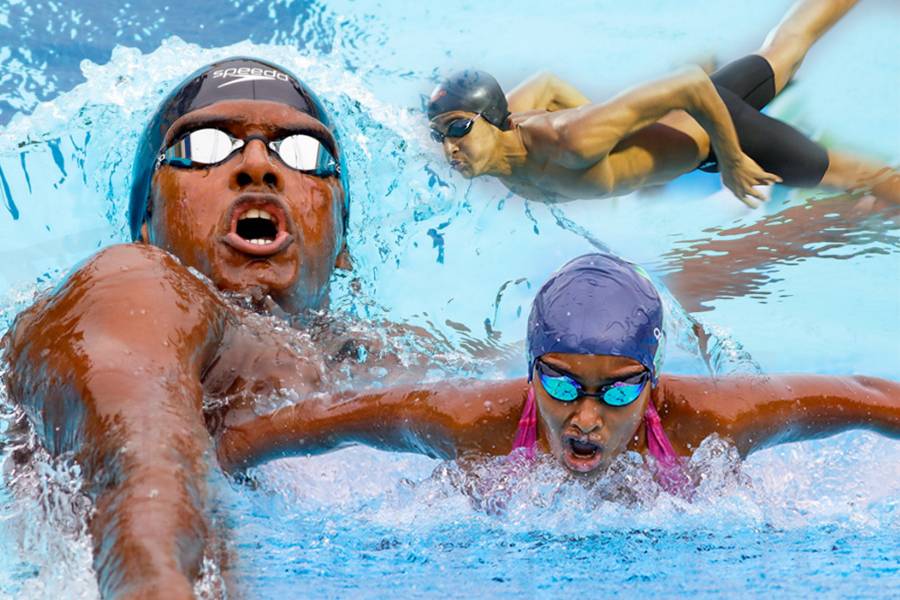 The opening day of this year’s championship brought about 22 new records at the National Age Groups, crowning swimmers as young as under 11 all the way up to the U20 category. Without much surprise, the second day too was a feast of records, some snatched by familiar stars.

Akalanka Peiris was able to claim his second Gold and second Record so far in the championship with a fantastic lap in the Boys U20 50m Backstroke event. His timing of 27.28sec beat the previous meet record of 28.23sec comfortably. Akalanka’s first record came yesterday in the Boys U20 Breaststroke.

Kavindra Nugawela grabbed his second Gold of the meet with a timing of 53.86sec in the Boys U20 100m Freestyle event. Sandu Savindi grabbed Gold in the Girls category of the same event with a timing of 1:00.87min.

Sanali Nuhansa won first place in the Girls U20 400m Freestyle event with a final time of 4:58.41min. Nuhansa is already a record holder in this year’s meet, winning Gold yesterday at the 800m Freestyle.

Dilanka Shehan claimed his second meet record today in the Boys 20 & Over age group clocking 4:15.57min in the final. His first record came in the 200m IM event yesterday. Shehan tripled his winning with the 200m Freestyle, winning with a time of 55.10sec.

Dinasha Hewagama and Sheneli Weerawansa renewed the Girls U20 50m Backstroke coming first and second respectively. With the standing record set at 33.67sec, Hewagama clocked 32.88sec to grab Gold while Weerawansa clocked in 33.25sec to finish with a Silver.

The Boys U13 50m Backstroke event also saw its record being renewed by Binura Talagala of Lyceum International School Wattala. He swam a 32.93sec to win Gold in the event.

Vandani Fernando of Kalutara Balika Maha Vidyalaya was able to set a new meet record in the Girls U11 50m Backstroke with a brilliant timing of 37.19sec in the finals. Similarly, Mihith Ekneligoda of Ananda College was able to set the Boys record of the same event with a time of 36.88sec, which he established during his heat. Ekneligoda already has a record in the 200m IM which he established on day 1.

The third day of the 45th National Age Group Swimming Championship will unravel tomorrow, 24th August at the Sugathadasa Swimming Complex. Stay logged for results, records and photographs from the meet!