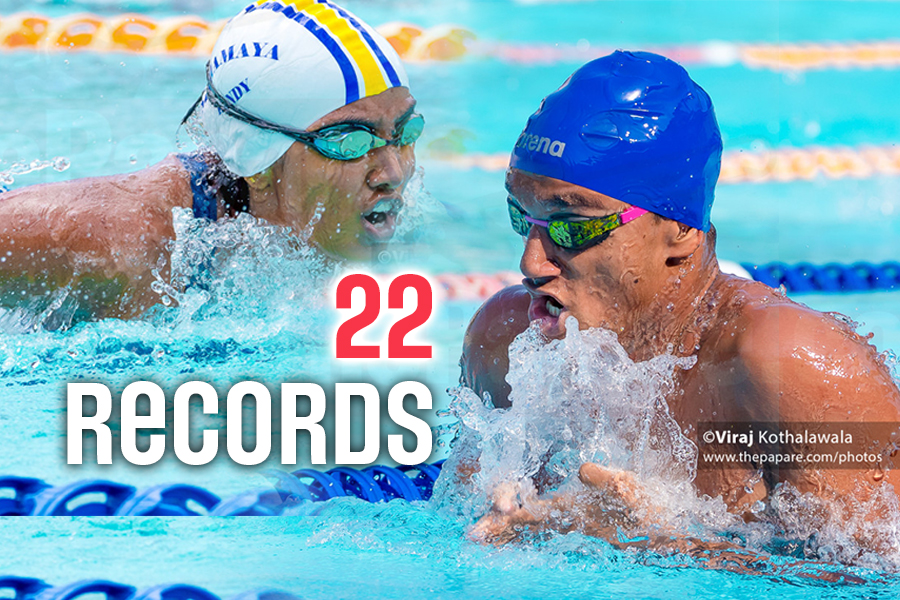 The tournament was doubled up in importance with it being the official trials for the upcoming Asian Age Group Swimming Championship, scheduled to take place from the 24th September to 2nd October in Bangalore, India. The Asian Age Groups will in turn act as a qualifying event for the 18th FINA World Championship in Gwangju.

A pool of 36 swimmers have been drafted by the Sri Lanka Aquatic Sports Union to represent Sri Lanka at the 13th….

The Girls U11 50m Breaststroke was won by R Rajaviveka who set a new meet record at 44.35sec. In a close second was Limandee Hettiarachchi with a 44.43sec, who also managed to surpass the previous record of 45.07sec.

The Boys event of the U11 Breaststroke was also renewed by Qaid Farook with a timing of 42.50sec. The Girls U13 50m Breast was matched at 39.68sec by Chathina Ammon while Cristina Perumal swam a beautiful 38.98sec to clinch the record.

Dasindu Perera of Ananda College won the Boys U15 Breaststroke with ease. He also managed to set a new meet record clocking 33.38sec in the final. The previous record was held at 34.04sec

Buddima Samadi grabbed a close .02 second record sealing win in the Girls U13 200m Individual Medley. While the standing record was set at 2:48.73min, Samadi swam a 2:48.71min to win Gold and take home her meet record.

All Island Schools Best swimmer in her age group, Hiruki De Silva of Gateway College Dehiwala renewed the Girls U15 200m IM with a timing of 2:41.19min.

Kaveesha Gimhana Silva of Nalanda College was the final recipient of a junior record with it being in the Boys U17 Butterfly event. The previous record in the event was held at 1:00.70min and Silva was able to swim a 1:00.31min to seal the deal.

Lahini Chethma Costa of Mahamaya Girls College Kandy set a new meet record in the Girls U20 50m Breaststroke event with a timing of 37.60sec.

Multiple National record holder in the short course format, Dilanka Shehan renewed the Boys 20 & Over 200m IM with a timing of 2:21.48min.

The Girls U20 200m Backstroke event saw two records being established, well before the standing record of 2:42.03min. Sheneli Weerawansa did well to clock 2:40.97min to finish with a Silver while Dinasha Hewagama of Ladies’ College grabbed a well-deserved Gold with a timing of 2:38.99min.

The final two records came from the Boys U20 200m Backstroke event where Kavindra Nuwela of Killer Whale Aquatics grabbed first place and a new meet record. He clocked in a magnificent 2:12.58min to grab Gold while Santhusha Mallawathanthri of Ananda College clocked in 2:18.96 to grab Silver and a record.

The second day of the 45th National Age Group Swimming Championship will unravel tomorrow, 23rd August at the Sugathadasa Swimming Complex. Stay logged for results, records and photographs from the meet!