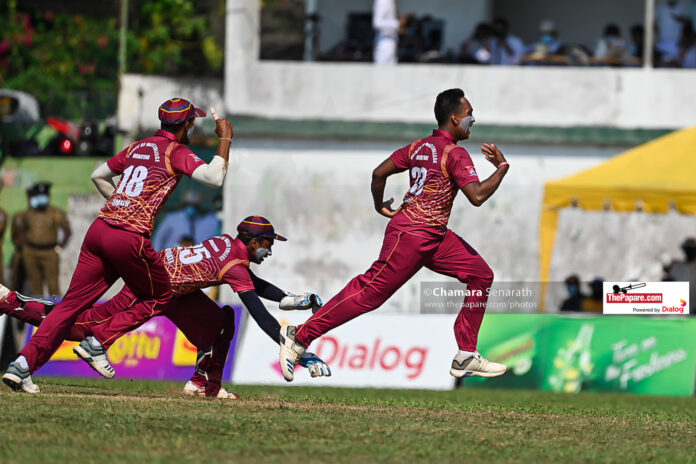 Prince of Wales College beat St. Sebastian’s College by 2 runs in the 36th Battle of the Golds One Day encounter worked off today (16th January) at De Soysa International Cricket Stadium in Moratuwa.

Having won the toss, the Cambrian skipper Dinura Fernando opted to bat first. However, the decision backfired on them as they lost three top-order wickets for just 32 runs inside the first 10 overs.

Things got worse for the Cambrians as they continued to lose wickets in cluster in the middle phase of the innings. The opening batter Tharindu Amarasinghe who showed some resistance with the bat scored 36 runs off 69 balls.

Sumalka Fernando and Vidath Dinendra put vital 38-run partnership for the 8th wicket which helped Prince of Wales College posted 134 runs in 46.1 overs. Fernando top scored with 41 runs off 80 balls with 3 fours and a six.

The speedster Chrishane Fernando was the pick of the bowlers for St. Sebastian’s College as he snared 3 scalps for 41 runs in his allotted 10 overs.

Chasing 135 to win, St. Sebastian’s College also got off to a terrible start with the bat losing four top-order wickets for just 34 runs inside the first 10 overs. Though middle-order batter Sukitha Prasanna held one end to score a crucial knock of 49 runs off 77 balls, he didn’t get enough support from the other batters as Prince of Wales College snatched a 2-run thrilling win dismissing St. Sebastian’s College for 132 runs.

Anupa Bandara came up with a match-winning spell taking 4 wickets for 33 runs for the Cambrians. With this win, Prince of Wales College takes their win tally into 15 in the history of Battle of the Golds One Day encounters.