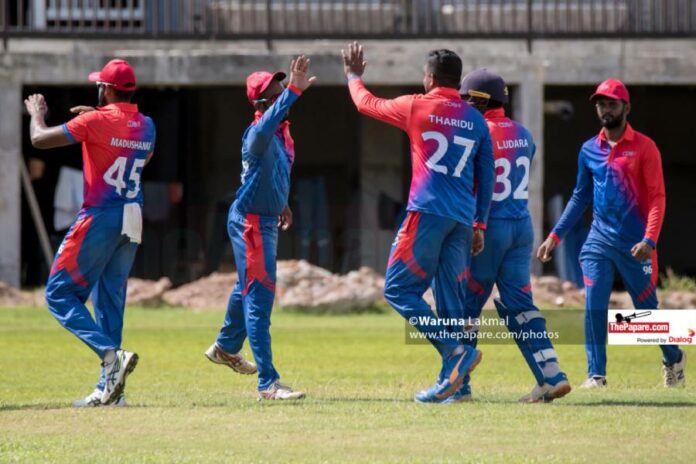 Only two more games of the 29th Singer-MCA Super Premier League 2022 were played today, as the 3rd game scheduled for the day had to be rescheduled due to bad weather. In the two completed encounters, CDB Finance and Hayleys recorded wins, beating HNB and Sampath Bank respectively.

CDB Finance secured their 2nd consecutive win of the tournament today at the P. Sara Oval, putting themselves on the top of the points table with 2 wins in 2 games. On the other hand, it was HNB who suffered yet another defeat, finding themselves in a tough situation with 2 losses in 2 games.

HNB’s decision was to bat first after winning the toss in the game, but it was reduced to 40 overs due to rain. They were in more trouble as the CDB Finance spin attack, led by the ambidextrous Tharindu Ratnayake and Skipper Lahiru Madushanka’s medium pace, dismantled them for a mere 142. In reply, CDB Finance finished the game in a real haste, scoring the required 143 in just 19.1 overs. Dhanushka Dharmasiri, Sithara Gimhan and Angelo Perera contributed with quick knocks, as Dharmasiri remained unbeaten on 44 in just 39 balls.

For Sampath Bank, it was Sri Lanka’s ODI & T20I Skipper Dasun Shanaka who topped the charts with both bat and ball, scoring 32 runs and claiming 3 wickets respectively. Young leg-spinner Kavindu Nadeeshan also impressed for the losing side, Sampath Bank, with figures of 3/41.

The next 3 games of the league will be played on the 5th of May at 3 different venues.

Match was called off due to rain and will be replayed on another date.