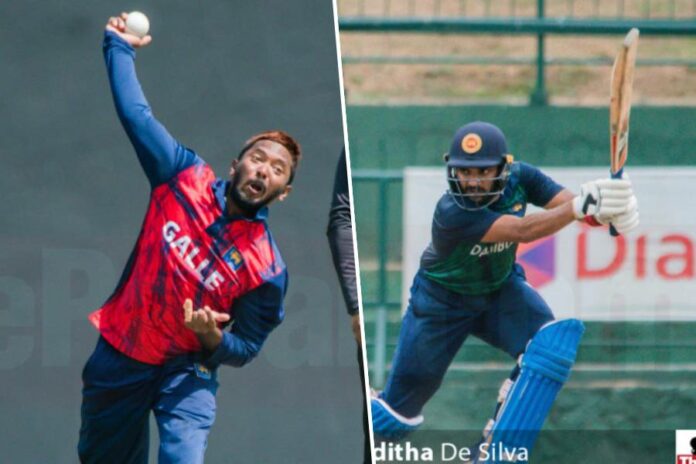 Twenty-eight-year-old top-order batter Lasith Abeyratne helped Sampath Bank start their campaign with a 16-run win over HNB in a rain-hit game at Colts Grounds. HNB was given a revised target of 238 as rain interrupted the game after Sampath Bank amassed 303 in their allotted 50 overs with the help of Abeyratne’s ton and promising all-rounder Sahan Arachchige’s 81. HNB’s chase lead by Dilshan Munaweera’s 83 was cut short by Shiran Fernando’s impressive spell of 3/43 as Sampath Bank clinched a 16-run win on the DLS method.

National cap Akila Dananjaya put up a brilliant all-round performance for John Keells as they defeated Hayleys in a low-scoring affair at the Army Grounds in Dombagoda. Batting at number 10, Dananjaya scored a stunning 43-ball 50 to help his team put up a decent total of 183. Opener Kavin Bandara too contributed with a valuable 50 for JKH while all-rounder Chathuranga De Silva was the chief wrecker for Hayleys grabbing 3 important wickets. The spin of Dananjaya and Sachitha Jayathilaka proved to be too good for the Hayleys batters as they succumbed to 155 runs falling short by 28 runs. Dananjaya also picked up 4 wickets to go with his quick-fire 50 to complete a memorable outing for him.

Newcomers Mode Engineering were beaten comprehensively by CDB Finance in their game played at CCC Grounds. Youngsters Muditha Lakshan and Lakshitha Manasingha shined for CDB scoring a half-century and picking up 3 wickets respectively. Dilan Jayalath’s half-ton was the only positive for Mode Engineering.

The next 3 games of the league will be played on the 2nd of May at 3 different venues.